So how's it all going with you out there? Things here are going well! Tomorrow marks the end of the fourth week of my fall training plan and I'm feeling good so far.

I have missed ONE run! 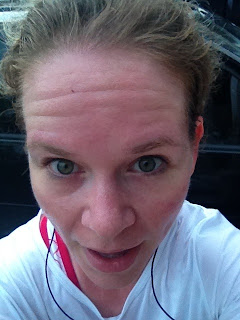 I know! WHAT! That's super amazing for me! I totally, totally chalk it up to setting the alarm for stupid early o'clock 0440 and NOT hitting snooze!

Of course, morning running leaves a lot to be desired in terms of my clothing choices, but hey, I really don't care that early 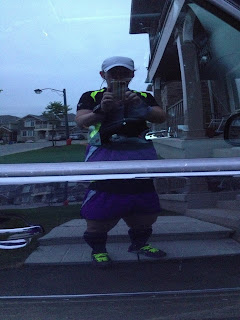 I've been doing really great in terms of hitting tempo runs on pace (and then being super scared because tempo pace is only slightly faster than targeted race pace and OMG!) and so some smugness has crept in: 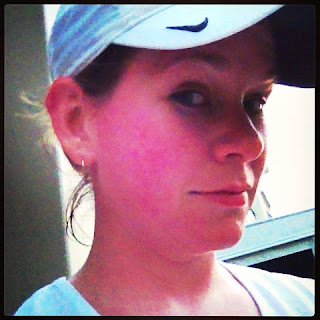 I was humbled this week though, when I attempted my first Interval paced run of 5x1000m at Ipace (4:30/km). I had to abort the plan in my fourth repeat and only barely hit pace once (at 4:33). My run-keeper friend Zin (one of my two active RK friends - the other is Zin's wife, Irina) suggested that I should attempt this on the track next time. That's an idea, but the next time I'm supposed to attempt this is next week and we are away camping, so I'll see. 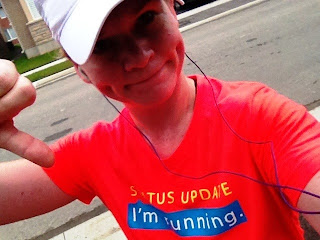 One of the goals this cycle is to lose some weight and finally get down to 125lbs. This morning I was at 131.1. My body lurves the 130s. Of course I could eat a hecka lot better 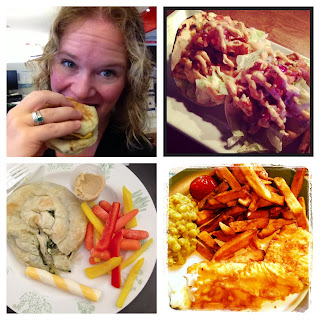 In all, I'm happy! I've been able to hit hot yoga once a week as well and I've gotten my arm workouts in once a week too! And yes, I still hold down a full time job and have a family (see how I wake up at stupid o'clock?). Longer term plans are of course forming because this cycle is really the ramp up to my first BQ attempt cycle, so I'm toying with going for a different coloured medal at the 2014 Around the Bay. Time will tell if this will be a viable option. 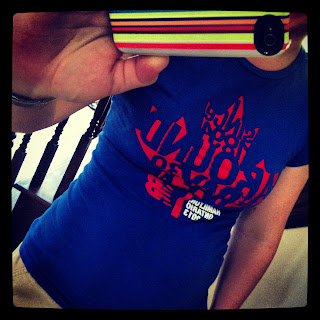 June was a great month! I started my official Fall training plan and was able to ramp the mileage up again, close to 200k. I succeeded in hitting every run that I had planned on (knowing I'd lose a few to a camping trip) and am really, really embracing being a morning runner, getting pleasure from being able to claim that I've run, "10k before 6a"

# of runs: 21. Pretty good! I haven't missed one run since the training plan started on June 17th!

Races: One, the Bread & Honey 5k It wasn't quite the race I had hoped for, but I learned from it which is always good:

Highlight run of the month: This is a toughie! I'm going to say that it was the first 20k with tempo of the training plan. I was lucky to run this with Sam and Phil in Burlington. While the tempo part was hard and I had to walk for a minute during the 20 minute tempo part due to a cramp, it was just FUN to run WITH people!

Highlight non-run, but running bit of the month: I was selected to be the 3 hour continuous pacer for the 30k at A Midsummer Night's Run on August 17th. I can't wait and need to start putting my costume together!

Average pace per KM: 0:05:44. Just a few seconds faster then last month which is great because it means I'm keeping my easy runs, EASY!

June was another great month. I'm so happy that my 0430 wake ups and early morning runs are working for me. Of course, I may not ever always jump out of bed, ready to get on the road, but I'm always so, so happy that I have!

Are you training for a fall race? Trying out a new plan? How was your June?
Posted by macnic at 8:32 PM 3 comments:

And I ran it well!

Let's back up a bit shall we?

When I failed to met my basic PB goal at the Bread & Honey 5k I wasn't too upset.

Then, the next weekend, Sam, Patty, and Emma ran the Moon in June 5k, all PBing, all placing in their age groups.

Jealousy is not not a good thing.

Sam mentioned this race and I consulted with my husband and presto-magic, for the cost of $35 I was ready to go after sweet, sweet revenge redemption.

I had to buy a new buff because I had nothing else to wear:

Of course, Fergus really wanted to run the Kids 1k and tried to convince me that he had the perfect outfit:

Alas, everyone was still in bed when I left for the race.

I got free parking, got my timing... thing (hey, it worked but it was a flat plastic thing held on to shoes with twist ties) and bib and swag bag (amazing stuff for the cheap entrance fee!) and then met up with Sam, Amy, Emma and Patty. Patty joined me for a 1k warm up and it was nice to run the first/last 500m of the course and discover that the food trucks there for the Canada Day festival would be spewing exhaust upon us as we kicked toward the end. Awesome.

The 1k kids race started (Patty ran with her 3 year old son) and I saw right away that Bella's daughter, Marina was in the lead at the start. I was so excited about that. I headed to behind the finish line and about 4 minutes later I heard the announcer say, "Wow. We didn't expect this" and the first place finisher in the kids race (a girl) came in, followed seconds later by Marina and then a THIRD girl! AMAZING job ladies!

I watched Patty come in with her son, and my friends Sarah and Sara come in with their kids as well and tried to take some photos. Then it was time for us 5kers to line up and race.

My plan was to only display the KMs on my watch. I knew that anything else would be playing with my head and would end in a disappointing result. I had my watch on auto-lap so I was able to check my time every kilometer anyway.

Amy, Emma, Sam and I lined up together but as soon as the gun went, we all headed to our own races. I saw that Sam was ahead of me and knowing that she's a faster runner than me, I decided to keep her in sight, but not to push too hard to catch her. This ended up being a perfect plan and once again, Speedy Sammy ended up being my personal pacer and target in a race.

So we ran on sand for maybe 750m-1k. Out to the turn around and back. It slowed me down no doubt but I just concentrated on the effort and Sam. We saw each other just after her turn and I gave her a thumbs sideways which was supposed to be a thumbs up and then I laughed at myself because I was having a good race. I wondered if she noticed my less then positive thumbage? Was she worried about my race? Probably. I mean its not like she was racing herself. I hope her worry for me doesn't ruin the rest of her race. Damn, I need to control my thumbs more next time.

At the turn, there was water and I grabbed some and walked to drink it and that gave me just the boost I needed to continue to deal with the freaking sand.

It took forEVER to get to 4k and it was then that I realized that I had the PB as long as I kept running at the same effort (remember, I can't see my pace). I'm running behind a girl in pink who is struggling with her hand on her hips. Because I can no longer see the actual Sam, Pink-Girl becomes my new Sam. Around 500m to go a man calls out to her and she waves him off and keeps going. Then I see her begin to kick for the end and so do I.

I'm getting that PB:

My official chip time was 24:11, earning me a 3rd place age group finish! Emma and Amy also had PBs (we're all in the same AG, and they came in 6th and 5th) and Speedy Sam placed 2nd in her AG! Here we are with our bling (thanks to Emma's hubs who took the photo):

Amy, Sam and I headed to the prize area so Sam could get her dinner for two gift certificate and I could get my running room hat. Which is the hat that Fergus DIDN'T choose at the Mississauga Marathon Expo LOL! 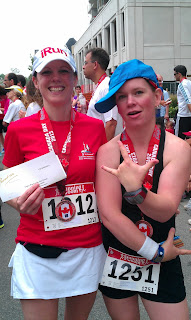 I'm happy about this race. I do feel like I could have run a lot faster, but I loved not having any mind tricks at all because I had very little feedback from my watch. My splits aren't pretty, but I'm only in week three of hard training, so lots of time to sort them out:

The scariest thing about this race is that it is only 10seconds per KM faster on average then my target half marathon pace. Wow! I've got lots of work to do between now and October 20th!

I hope you had a great Canada Day!