Well, it turned out that week seven ended up being a bit of a reduced week. I didn't realize how busy I was at the tail end of the week and as a result, I was not able to hit all of my workouts. I spent a good amount of time celebrating the year with friends though, so that is always a plus!

On Friday night, some of the mum's I've met through my older son's hockey teams got together for dinner and drinks. The company was awesome of course, as was the food, but the restaurant took over 2 hours to bring out our mains! Unfortunately, quite a few ladies didn't make the trip down the road to the bar for last call. But I did!


Saturday evening, we had our team hockey Christmas party. It ended up being at our house and it was so much fun! At one point, almost all of the kids (and parents) were pulling out their "Whip-Nae-Nae"


As a result of two big nights (aka not a lot of sleep), I didn't get in any swimming this week! And I also didn't do any strength training, not even a single push-up! I'm finished work on the 23rd though and don't go back until January 4th, so I hope to fit in a lot more during the office closure period. Here's how this week shook out:

Monday: Off
Tuesday: 8 minute test on Trainer Road. My FTP went from 160 to 193. I'm ready to work! 21.9km total in 1hr
Wednesday: Off - my calves were sore in the AM and no time in the PM/at lunch
Thursday: 9k in the AM, running and 45 minutes with Goddard (17.3km) in the PM as I wasn't sure if I'd fit it in on Friday before my dinner with the ladies.
Friday: I got home early after driving downtown to work (and paying way too much to park for six hours), so I asked Zindine for an easy TR workout. He came through with Carter. Except I picked the +1 version and made the 45 minutes a lot harder on myself! I rode 45 minutes for 17.6km
Saturday: I fit in a 7k run, mid-morning between hockey and shopping and cleaning up a bit before the party
Sunday: More hockey for both boys and a mission to get my nails done resulted in a "long run" of only 9k. But my nails look good!

Despite the fact that its Christmas this week, I think my mileage will see increases for my last off season week! If my calves cooperate - they are so tight. I need to ensure I get on fixing that before more problems (PF!) arise!

Merry Christmas and Happy Holiday's to everyone!
Posted by macnic at 2:27 PM 1 comment:

Week Six of Off Season!

Sailing right along in this off season thing! I've made a firm decision this week in regards to swimming and took a foot off in terms of cycling, but I still managed to fit in what I wanted.

In terms of swimming, I had originally planned to get to the 9pm lane swim on Thursday nights. After four weeks of thinking that this would happen and not, I decided that the stress and guilt of planning for this swim time wasn't worth it. I will likely NEVER make it to a 9pm anything on a week night. Let's face it, in order to get a good 7 hours sleep, I will need to be in bed most nights by 930pm at the latest. That swim time just doesn't fit with my lifestyle. And I'm not even training for a triathlon. Letting that go and realizing that I may only make a swim time once a week if I'm lucky really gave me some extra energy to go and attack things again. In the end, I swam on both Saturday and Sunday as my sons both had hockey schedules which cooperated with the lane swim times. The thing is, when I swim, I really enjoy it.

In terms of cycling, this was the final week of my sweet spot base building plan and I decided to skip the final 90 minute spin. I just wasn't feeling it and I wanted to take some extra time back for myself (and sleep, let's be honest). In the end, this was the right decision as I was able to attack my long run on Saturday and due to running with some speedier friends, the back half of the run was rather quick!

Here is how week six shook out:

Monday: TR Black - a consistent effort for an hour. Not all out, but no lovely 60% breaks either

Wednesday: Slept in. Ran 7k at the gym at lunch with 5x2 mins fast, 2 mins slow (Coach Phaedra special), this felt great! In the evening, I was supposed to repeat TR Black, but instead I used my home selector weights to fit in my strength training.

Thursday: 8k early AM run before meeting friends/colleagues for breakfast prior to work. My stomach was slouchy like I had drank too much so I kept it easy.
Friday: After work, I hit the trainer for the second Black session of the week. This time, I was prepared and it felt better. Then, I met up with a whole bunch of my running friends for dinner and left with a sweet pair of #runnerd socks (no photo, sorry)


Saturday: Long run day! While I was supposed to meet up with Sam, Ivanka, and Amy at my place at 7, only Ivanka showed as the others were not feeling well. We left right at 7am and ran about 5k to Kelly's place (fellow hockey mum), where she joined in. Around 10k, Henro joined us and the foursome was complete. Once we met up with Henro, our pace dropped to about 5:30/km, but it felt good and we kept up the conversation. I love running with people it makes the time fly. Ivanka and I ran 20k total with Kelly putting in her longest run ever at 15k and Henro continued past my house and home to his own place for 14k. Great day (no photos! - that was Sam's job!).

After I got home and showered, I noted that Alasdair's hockey practice and lane swim time were at the same time, same place! With no time to spare, I made the decision to go swimming. This worked out well and I swam for 1,000m - feeling good the entire time.


Sunday: The day started slow when I turned off my alarm and decided not to run. HAHA. I knew I wanted to get back to lunch lane swim, so I ate a bigger than normal breakfast and then headed out to church and to get groceries with Fergus while my husband took Alasdair to hockey. After everyone was home, it was time to swim. I planned to be in the pool for an hour and I did. I managed to swim 50m at a time (HUGE!) and ended up with 1,200m.

I got home in time to dry off and eat before changing again into running gear. I ended up getting my run in, taking the long way to Fergus' 2:30pm hockey game. YAY for fitting everything in!!! And we put up our Christmas tree! 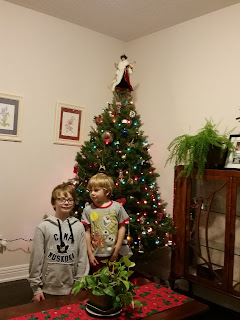 Total distance for the week: 84.96k, lower than "usual" this off season, but I skipped about 45k on the bike (two rides) and that was the right thing for me.

This week should be interesting. I need to decide if I'm going to take another easy bike week or re-take my FTP test (which is highly anticipated among my pushy triathlete friends). Seeing as longer mid-week runs will start in two weeks, I should likely up my run distance as well in individual runs. Finally, I would love to get back in the pool twice. Oh, and strength training. Ya. I guess I shouldn't forget about that.

So, weeks four and five have come along in the off season! I had a bit of a lag last week, but such is life. Week four was pretty special! I got back into the pool with a coach and I got in a great run with the girls!

Monday: TR Tunnabora. This started with Isolated Leg Drills which I hate, but I did this in the living room as my husband was away and I brought the trainer up to watch TV while I rode.

Wednesday: 30 minutes strength training in the afternoon, TR Geiger in PM. I really pushed myself in this one.

Thursday: Treadmill lunch run with 1.5 miles at BQ pace just for some leg speed. I didn't want to do this, but got it in! Total was 5 miles.

Friday: TR Warlow. 1.5 hours of workout before heading to book club to undo it all with wine and appetizers.

Saturday: 18.5k with Sam and Ivanka in Burlington. Great times! So great to run with people again! Then 40 minutes easy spinning with TR Recess.

Sunday: Irina came out to Milton and coached me through lane swim. What a difference in my speed by the end! I need to find more time to swim. Then I rounded out the week with a 6.61k run.

First an awesome coached swim with this beauty (including her entire bag of tricks), and then a lovely catch up over coffee. Endurance sport has brought such amazing people into my life. I am such a lucky gal! #swimbikerun #likeagirl
A photo posted by Nicole (@macnic05) on Nov 29, 2015 at 8:24am PST

Week five started out just as strong! But life and the BLAHS just got in the way!

Monday: Once again, my husband was away, so the trainer came up to the living room and I rode while my boys and I watched Nightmare Before Christmas for the first time. Cute movie and a perfect length for a 1 hour trainer ride.

Wednesday: Alasdair had a 6am hockey practice, but my dad was picking him up to bring him back to my folks and feed him breakfast/get him to school. So after I dropped him off, I went for a quick 5k run. At lunch, I hit the gym for more Strength trainer, but I really didn't want to do anything. I used the machines for this session and was there for 35 minutes total. That night, I switched up my trainer ride and rode the 90 minute Palisade ride. Whew!

Thursday: I finally got out for an early morning run! 8k easy and steady which was simple after the hard bike the night before!


Friday: I had the day off because we were hosting our annual Christmas party on Saturday and I wanted to do the majority of running around. The problem is, I couldn't bring myself to get out for my planned long run. I did my running around and missed lane swim. So, I hopped on the bike for the 1 hour Tallac workout in TR. At least I did something.

Saturday: Sigh. My alarm, which I had thought I set correctly, didn't go off. No long run. I did manage a 6k run after my party running around was completed.


Sunday: HAHAHA. I was a bit of a zombie on only 5.5 hours sleep but I did ride 40 minutes recovery on the bike.

This week, I am REALLY hoping to hit the pool twice! The long run needs to be at least 20k and I'm in the final week of my Trainer Road plan! Let's hope the piles of left over food and wine at my house don't derail me throughout the week! After that, its time to build up a bit harder before distance training begins!