Back to reality this week. And reality meant a deep freeze!

Coming back from vacation and being sluggish coupled with a travelling husband and the cold meant that I spent a whole lot of time on the treadmill this week. In fact, only one run wasn't done on the treadmill and that was done on the indoor track at the Milton Sports Centre. Here's what the end of 53 laps around a 200m track looks like.


The weekend provided a much needed break though! We had a long weekend in Ontario to celebrate family day and I really feel like we actually got a chance to relax and chill out. There was hockey for my boys and rep lacrosse tryouts for my oldest son, but we also had friends over for dinner and did some simple things, like rolling all of the coins we had hanging around.


I even managed to watch the US Olympic Marathon Trials live and was super inspired watching all of the runners, especially Amy and Shalane who reminded me of the Ottawa marathon run from last year. As Sam noted, we're the original A&S. As always, I was routing heavily for Meb who proves time and time again that age is just a number and I was thrilled to see him come in second place. I do admit that I got a bit afraid after a commercial break when I couldn't see him in the lead pack any longer, but I quickly realized that he had just tucked his singlet into his shorts. So funny how you can get personally invested in the elites. I actually spent the first hour watching the trials on my bike with Trainer Road and am happy to have fit cycling back into the mix. I hope to hit the bike at least twice this week.

Here's how my week 7 shook out:

Monday: 6k on the treadmill at lunch. I slept in and totally missed the 16k I was supposed to do.

Tuesday: Rest. My husband was travelling so that took before and after work out of the equation and I couldn't manage a lunch run either.

Wednesday: 8k in the evening. My husband was back home! YAY!

Thursday: 5k at lunch with the middle mile at BQ pace and 53 laps around the track for 10k in total. That made 15k on the day.

Friday: Rest in anticipation of running my long run the next day.

Saturday: I couldn't make the timing work for the run meet up based on my son's activities, so I ended up on my bike trainer for an hour with Black during the US Olympic Marathon trials. 22.5k in total.

Sunday: 29k. On the treadmill. All at once. Thank goodness I haven't had time to listen to the last three episodes of season two of Serial. Do you know what's on TV on Sunday mornings? Fishing shows, Infomercials and Church service. But when the temperature is -31c, I'm not heading outside for 3 hours. On purpose.


I made the run interesting by stopping for a minute or so after each 6 miles and changing pace every mile. That also helped. Never has the mantra "Run the Mile You're In" been more clear to me.

And that's it for week 7. I did miss a bit of distance (13k), but I also fit in a spin, so I'm calling evens on the week. Week 8 is on track thus far and we're getting a break from the cold, so that's always a good thing.

Hello! So much to catch up on! I've been absent the past while due to vacation. First, there was the hustle in getting ready to go on vacation, then the vacation itself and finally, being back at work and settling back into a routine. That's been tough. I haven't even grocery shopped yet, so I've been stealing enjoying my kids lunchtime snacks as my own (goldfish crackers and cheese strings anyone?).


That's about half of our 22 person group, ready to cruise on the Disney Fantasy (Yes, we were on the sailing that had mechanical problems and skipped Castaway Cay). The trip was awesome! This is was our third sailing with Disney and even before the discount we received as a result of the malfunction, we were already thinking about our next trip!

Let's catch up on running a bit, shall we?

Week 5 went well, very well. I ran 73.94k over 5 runs, including my long 24k run with Amy. It was a great run, but unfortunately, we saw a coyote hit by a car right in front of us and die. We stopped and called the humane society and they came to pick up the animal. the driver didn't even stop!!! There was a lot of damage to the front of the drivers vehicle as well, so I'm shocked that they just kept driving! I also hit the trainer for one ride, putting in 17.6k on Carter +1.


Week six was the week were leaving on vacation, driving to Buffalo on Thursday evening, flying to Orlando on Friday and sailing on Saturday! I front loaded my week, but running the first half marathon pace run on Sunday which allowed me to take a bit of pressure off. In the end, I only fit in two runs, a 12k and a 26k, but that 26k was an epic run: All Treadmill! The last 16k was done at pace and the run actually went amazingly. I got a whole lot of support for this run from Emma and Sam which also made it easier. I couldn't quit as people were waiting for me to finish 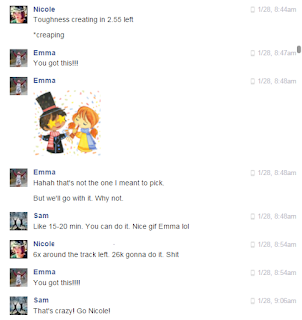 Then, we left on vacation.

For the week of vacation, I ran three times! They were all on the boat and they all felt great!

While we were unable to make it to Castaway Cay, we still got a chance to run the race, around deck 4 of the boat on the running tack. I started with the first wave and even though I had no pace feedback from my garmin (it would pause and not track things correctly, for example a 4 mile run became 19k!), I still managed to run faster than half marathon pace for first place female!

Not quite the view I had hoped for upon finishing my second Castaway Cay 5k, but I'll take close to PR effort and first female. Thanks for the great shirt @redshirtrunning #mywintervacation #disneyfantasy #disneycruiselines #justrun #likeagirl
A photo posted by Nicole (@macnic05) on Feb 5, 2016 at 6:04am PST

We got home last Saturday night and I still managed to fit in a short run on Sunday, even though I could really feel that my "land legs" hadn't come back yet. That 6k brought my weekly total up to a respectable 25.5k run on the week!

And now, we are back home and I'm tackling week 7 of the plan. With the success of the 26k treadmill run and the 5k at faster than half marathon pace behind me, I decided to pull the trigger and finally signed up for the Goodlife Toronto Marathon. Whew! In 78 days I'll toe the line at marathon #5 and BQ attempt #3. Let's hope this one sticks.

In the meantime, I'll continue to bask in the memories of another awesome family vacation as I run through cold, wind and snow.