Off-season continues to truck along in these parts. As mentioned last week, one of the things I've been trying to keep on top of in this off-season is my quality sleep. Let's face it, I'm a busy person. I commute 2.5 hours a day and I'm frequently attending my son's sporting events at the hockey rink. Fitting in quality workouts mean that I need to get up early at times. Even on the weekend. 0430 alarms are not new for me. 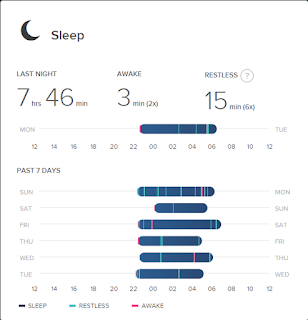 One of the best features of my Fitbit Flex is that I can set it to track my sleep. Once my sleep is activated, the Flex will also track my sleep, restlessness and awake time (when Fergus comes into my room at 3am and has me take him back to his room). I set my goal of 7 hours of sleep this off season. I've been trying to follow this religiously and thus far, I'm doing well (don't look at Saturday night, I stayed up too late reading and we had to be up early for a hockey game).

Quality sleep allows for good workouts and a repaired body. You can Google the studies yourself, but you know its true. The goal in off-season is to set up good habits which will see me through the spring season strong and healthy. Sleep will go a long way towards hitting these goals.

Last week went really, really well! I'm still in love with the trainer and have rediscovered my love for the pool!

Friday: Early AM 15k long run. My son was in a hockey tournament Friday, Saturday, Sunday. They came in third.

Saturday: TR- Eclispe. 90 minutes of riding with 60 of that in the sweet spot. This was tough. 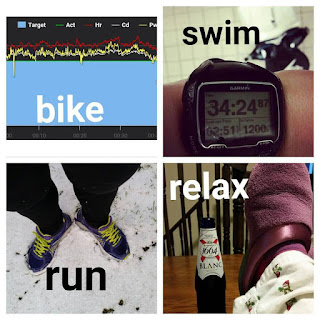 So, last week was a win! I hit my goal of increasing my run distance and getting back into the pool. I also didn't skip my weight training (but I wanted to!). Not a bad week, not at all:

This is without a doubt, the best off season I've had.
Posted by macnic at 10:25 AM 9 comments:

Well, off season, week two has come and gone and I'm quite happy with the way it all went down.

My huge focus this week was eating better and getting quality calories in. While I think I did a good job, my scale had me UP in weight this morning. Frustrated doesn't even begin to explain how I feel. I feel like I made good choices all week. I logged everything on My Fitness Pal. I was at or under my calorie goal the entire week. Sigh. Back to the drawing board I guess.

In terms of workouts, I met my arbitrary goal of increasing my run mileages this week and I managed to get my strength workout in at the gym as well. Man, do I dislike lifting weights. I know its good for me though. I really will need that core and upper body strength to push through the final stages of the marathon (if I run one again in the spring - jury is still out).

I hit all of the bike trainer rides this week and even added a fourth, 30 minute recovery ride on Sunday. To say that I am enjoying the trainer would be understating it. I love that I can get up on it and get a workout done at any time (even at 5am like this morning). I love that Trainer Road does all the work for me. It has built the program and workouts, I just need to select the next one on the list and start to spin.

In other exciting news, my husband even got HIS road bike up on the trainer for a quick spin to test it out. I'm really hoping we can both improve and include date rides in our summer plans moving forward. We'll likely need to modify our roof rack in that case.

All in all, it was a great week depsite the number on the scale going in the wrong direction.

Let's see if I can actually make it to the pool this week as well!

I'm really happy with this big change in routine this off season. Part of that is because I'm really watching my sleep as well. More on that in another post.
Posted by macnic at 10:56 AM 5 comments:

And now for something completely different

Ahh, the off season. Realistically, this is my 5th off season since I starting running distance races in 2011. Every off season sees me with the same basic goals: Get in more strength training, Lose weight.

2015 will be no different of course. Based on being pretty lazy during the summer, I'm at my highest weight since my post partum season in 2011, so dropping the weight is a major priority. So much so, that I'm currently on a 56 day streak on MyFitnessPal, tracking my food (and booze) intake. I don't track my water (but I drink it) and I never track my cup of morning coffee (I use some cream, but no sugar). I'll friend anyone within reason as I'm an open book about stuff like this (I started at 142lbs), so find me as macnic.

But what of the difference for this particular off season? Well, it started with this: 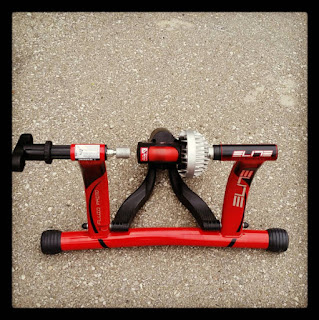 That, my friends, is a Fluid Force bike trainer and last week, I started a six week base building program on Trainer Road. Trainer Road is the program that so many of my triathlete friends use, that I had to give it a try.  Emma was kind to give me a code to get my first month free, as well as continually encourage and help me figure out the static bike thing. Irina and her husband, Zindine have also given me loads of pointers and tips. I'm a lucky gal. I fully feel that sticking to this program will make me a stronger runner at the end of the six weeks.

My first week is completed and I'm happy with how it went. Of course running is still in the mix and swimming will also be added. I still have to figure out how I'll make the weight training part of the mix, but these things have a way of working themselves out.

Monday: 1hr bike trainer - FTP test to set up my program
Tuesday: Off
Wednesday: 1hr bike trainer, first workout of the plan
Thursday: 7k run in the AM, I felt great!
Friday: 1.5 hrs on the bike trainer before work. I'm particularly proud of that one
Saturday: 12k Group run with Zindine, Sam, Hockey mum Kelly and Irina on her mum-bike
Sunday: 6k glorious run in the early AM with the first frost.

Total: 101km on the week. Not a bad start to off season! And I lost a tiny bit of weight. I really hope to be under 140lbs by next week. I just have to stay away from the Halloween candy!

So, biking, friends and salad. Its what the off season is about for me this time around.

Hello? Is this thing on?

I know, I haven't posted all summer. To be honest, the summer didn't work out as planned. I didn't bike, swim or run as much as I had hoped. I gained too much weight. I basically stopped caring so much about meeting any goals.

As such, by the time the Niagara Falls Half Marathon rolled around, I had one goal: PB the course.

Despite ONE long run of 20k (in JUNE!) and a few long runs of 18k, I was sure that this goal would be reached. The course is a beauty, straight, flat and I know it having run the race twice before.

Then, we woke up to heavy wind with gusts up to 50kph.

I picked up Sam and quickly headed down the highway enroute to meet Emma, her husband and Ivanka, all of whom were running the half. When I say I quickly headed down the highway, I'm not lying. Coming down the Skyway bridge, I notice an OPP car pull onto the road and began chanting, "not me, not me, not me..." It didn't help. So, if nothing else, I got my very first speeding ticket on the way to the race.

The best part of the day happened when we got to the Cowne Plaza and met up with Emma, Ivanka and Steve in Emma and Steve's hotel room (private bathrooms!). They ended up with a room with a bit of a view (kinda). 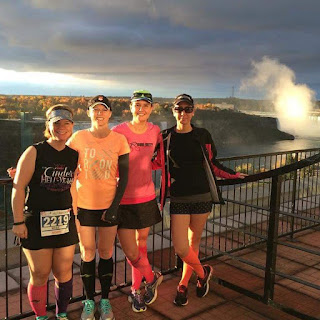 Okay, enough crapping and viewing, time to get on the bus and to the start line. One of the few things I don't like about this race is that because it starts at the 21.1k mark of the full marathon, they bus you to the start and you get there super early. then you sit around on the damp grass and second guess your outfit before pulling on a long sleeved shirt under your tank. Oh well. Time to line up and go.

The four of us started together (Steve set out at a faster pace). I ran with music on from the beginning because my goal was to run 5:27/km until the last 3k and then PB the course. I knew that all three gals were in better shape than that and would end up ahead of me. Plus, I just wanted a nice, introspective run. Nothing was really riding on this one, you know?

So, I turn on my music and Sweet Caroline comes on. Perfect. We take off and I've got the crowds around us "Ba-ba-baing" with me. HAHA. Then It Takes Two is the next song. I rap the first bit because.... who doesn't rap the first bit of that song? Ladies Love Cool James, yo!

Before long, I'm telling the gals to go on ahead, I'm on pace and don't want to get caught up with them. I pause at a water station, even though I had a cool new hand-held thing 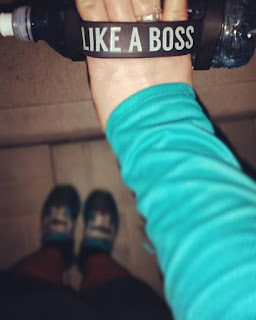 Then, things started to go down the toilet. I started to feel BLAH. I took a gel. Nope. I felt... not good. In the end, I stopped to use a portapotty in the 12th KM and from then on decided to have a good time with the run as there was no way I was getting a course PB in the relentless headwind that day. And so I did. I just had a good time. I enjoyed my diverse playlist. I sang along. I looked out over the Niagara River and enjoyed the view. I started doing 9s/1s run/walks because the wind was just relentless. It made it so much easier mentally to do that.

Of course, you know that means I hammed it up for all of the photographers! As the race used marathon photos, I decided not to pay for the photos (crazy high prices), so I'll just give you one: 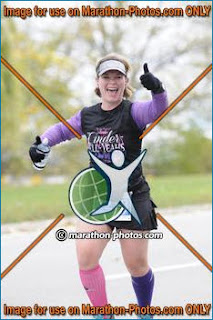 In the end, I crossed the line in 2:02:31. Poop, headwind, great friends, great playlist. Its what its all about. It never hurts to see one of the wonders of the world either.

So, that's a wrap on an easy summer and half marathon 18. In the off season, I've taken on a new challenge, but I'll be back (promise). To discuss that.
Posted by macnic at 12:43 PM 3 comments: