The seeds for running this race were sown the moment I crossed the line at the
Mississauga Half Marathon. Don't get me wrong, I was very happy to have finished and to have beaten my in-going goal, but I knew that I could have done better and I wanted to take the time over the summer to train for improvement and to get there.

On Sunday, I was not disappointed.

Race morning came early, but not too early as some brilliant race director decided that this race was to take place the day after daylight savings time ended, meaning that we got an extra hour of sleep.

I was up at 0530 as was Fergus and my husband and so we all headed downstairs to the kitchen for breakfast. Fergus joined me to help eat my bagel and I relaxed knowing that there was lots of time to get to the race and I was as prepared as I could be.

I got dressed and decided to wear a tank top under my Warrior Dash long sleeved top. I wore my summer tights and my light wind jacket. It was cold out with frost on the roofs of houses, but the sun was shinning brightly. I grabbed my dollar store gloves, my homemade pace band, and added a quick motivational message to my left hand: 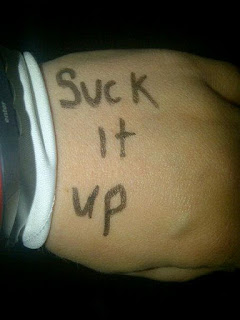 We got on the road and got to the start line 20 minutes before my targeted time of 0730. Ken and the kids headed to Tim Horton's and to visit with some friends while I stayed warm, used the washroom and kept an eye out for Marlene, who was the 2 hour pacer. Before long, I spotted her surrounded by her groupies chatting with her friends and I went over to say hello. She was dressed in a rainbow tutu and leg warmers and had the bunny ears. I stayed back to allow her to do her own pre-race thing and get advice from her people, but basically stalked her kept her in my sights the entire time.

After a late (by 10 minutes) start by the marathon, I met up with Marlene again outside and we headed into the mass crowd of runners. I'm so short and she's fairly tall that I almost felt like grabbing a piece of her tutu least I get lost.

This is one of the complaints I had about the race. The start was really pathetic with no corrals or anything. It was just a HUGE crowd of people. I think they could start it on Highland proper and set up corrals as well. They could also ask the bunny's to carry pace signs for the first two kilometers or so, just so that people could find them. Lots of people were asking Marlene if she was 10 and 1s as that is who they wanted, but we never saw that pacer.

It was while waiting for the start that I realized that I had no need of my wind coat. It was cold, but warming up with that beautiful sun. Though the coat was free, I couldn't bare to throw it away, so I tied it around my waist instead.

Then we were off. I stuck right with Marlene, running either behind or beside her. I didn't talk to her at all and I don't know why. I'm normally VERY chatty while running, but I was very serious about this race. I had no time for idle chatter. I needed to get on pace, stick to pace and continue to feel good.

And we did. The start was crowded, but quickly thinned enough to allow us to run at the 5:40 pace per KM easily. I noticed that my Garmin was perfectly aligned with the KM markers and locked in the pace.

4k came out of nowhere. I turned to Marlene and said, "Fastest five and a half minutes EVER", to which she replied, "That's good. That's really good!". We chatted briefly about being over dressed and then were climbing the on ramp to the Red Hill Valley Parkway. I told Marlene, "Well, no offence, but I hope not to see you again today." There was no offence taken at all and off I went to bank some time on the downhill.

Getting on the highway was very cool. People travelling southbound were honking at us and waving and there were spectators on the overpasses cheering us on. Under one overpass there were two guys playing the drums and that gave me a lot of energy. It was also the time of the race that people started stripping down. I ran with a few men who stripped down to nothing but shorts and women who stripped down to just sports bras. For November 6th, the sunny, 12C day was so unusual that I think many people were overdressed.

After about 3k, I noticed that my effort was needed a bit more and realised that the majority of the downhill part of the race was complete. I took a GU and told myself that I had about two minutes in the bank and that all I had to do for the next 5k was to hold on to the 5:40 pace. 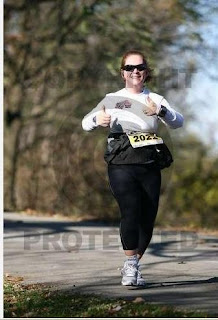 The next 5k were along industrial roads, heading to Confederation park. The road wasn't shut down and we were forced to run pretty much in single file as we were confined to the bike lane. I was still feeling good, taking water in and staying on pace. I wanted to ask the people around me about their pace and goal, but I just wasn't feeling like chatting at all.

I was so, so, so focused. I always run with the same list of music, but put it on shuffle. I couldn't tell you what songs I heard other than the very first one (Ant's Marching, live at Central Park, Dave Matthews Band). Unlike the race at Mississauga, I wasn't singing along or joking. I was running.

And then we were on Beach Blvd and I was boinking.

Oh man, it was pretty bad.

I took a Gu hoping to hold myself off.

I looked at my hand.

I told myself that I had time to ease off a bit, that I could allow Marlene to catch me and then stick with her to meet my goal.

I told myself that the Gu was working and to just keep going.

And then, we were on the waterfront trail and the wind hit. Marlene describes this as a "nice breeze", but it might as well have been a full on tropical storm to me. Oh man I was feeling the effort. I saw a EMS golf cart and actually thought of how nice it would be to just sit down.

Of course I kept running all of this time, counting down the kilometers, looking at my hand, keeping my pace.

There was no giving up. I didn't even want to give up those two-ish minutes I had in the bank.

And so on I ran. The crowds got thicker and lots of people were walking on the path toward the finish. This is my second complaint. The path should be sectioned off so that the public can't walk on the same path as the racers. It is wide enough to give everyone their own area. Seeing those people walking did a number on my head as well and I just wanted to stop and walk with them.

Of course I didn't as I knew that would be the end of my race. My mental chatter went like this:

Oh, it would be so nice to just walk for a few seconds.

Are you kidding? Once you walk you're done.

But I will see Marlene and then just run to the end with her.

If you walk and then try to keep up with her, you'll die.

I tapped the 20k marker sign. I did this at Mississauga as well and decided that I'd do it whenever I ran a big race. The signs were on the north side of the path and for some reason, I headed back towards the south side. Just as I looked up, I saw my son and good friend Trudy who were watching for me: 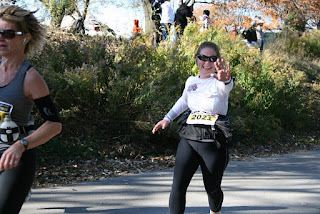 I booted it over to Alasdair to give him a high five and a kind of hug and then headed on to the end. I was so revived having seen them that I didn't feel any effort any longer. I was just running for the end. I knew I had the 2 hour goal in the bag, that I couldn't fail and I was finally enjoying it after a few kilometers of tough running. 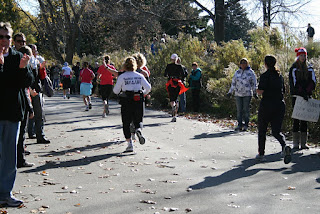 I turned the corner after the final tiny uphill (that felt like a mountain) and saw the finish. While I didn't hear my name, I did hear the announcer congratulating us as we came in saying, "You've all done it in under 2 hours! Well done! Great job!"

That announcement made me quite happy: 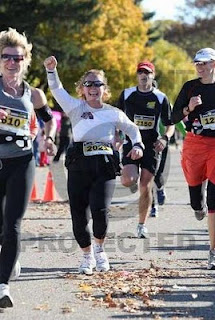 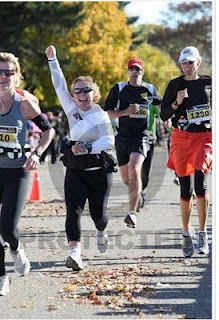 And so on I went to cross the finish line.

I did it! I trained myself and was able to hit a major milestone and a major personal best less than six months after my very first half marathon. I ran through the finish, grabbed my water and medal and heard the announcer say that the two hour bunny was coming up to the finish, right on pace. I stopped and waited until I could grab Marlene to shake her hand. She asked if I had done it and I said, "Oh ya" showing her my Garmin, acting all casual instead of letting on about the hellish last five k. I thanked her for the start and headed into the crowd to find my family and friends.

So, races for 2011 are finished. I'm more than happy to go out with this one as the last one. One day soon, my quads and knee will stop yelling at every move I make and I'll be out running again, but until then, I'm going to enjoy the glow of hitting the goal and breaking that two hour mark.

Thanks for coming along on the journey with me.
Posted by macnic at 7:52 PM