I guess I've been a bit of a slacker over here in blog land. Things have not been very happy on my runs. I will have to give you separate updates for running and cycling. Today will deal with cycling.

Simply put, I am really LOVING the bike.

Of course, it helps that putting skinny tires on my bike has increased my speed significantly. Now I'm always over 20km/h speeds and in fact I've topped out on rides at an average speed of over 25km/h.

Get this girl a road bike! 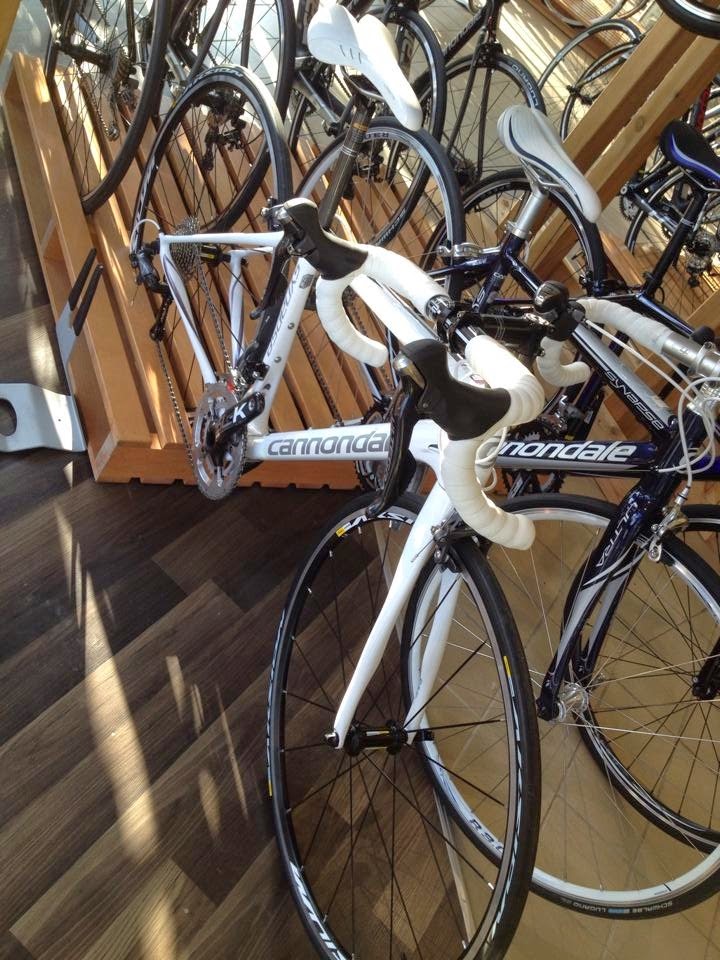 Obviously, I don't have a road bike yet. I've looked at one. My husband has done some research as well. It is doubtful I'll get a bike in time for this season, but I may be joining the masses at the Fall Toronto Bike Show to see what's what.

Its not just the speed. Obviously, there is rapid improvement with the bike as its a new sport and I'm just learning how to crank it. Best of all, I'm loving the freedom to get out there and move and explore.

After my solo 50k ride, I went into two down weeks which coincided with pre-vacation and actual vacation. I cranked out 20k in week 4 on the stationary bike at the gym but that was the longest I was able to bike that week In total, I managed only 64k between running and cycling, but I was happy with what I did fit in. 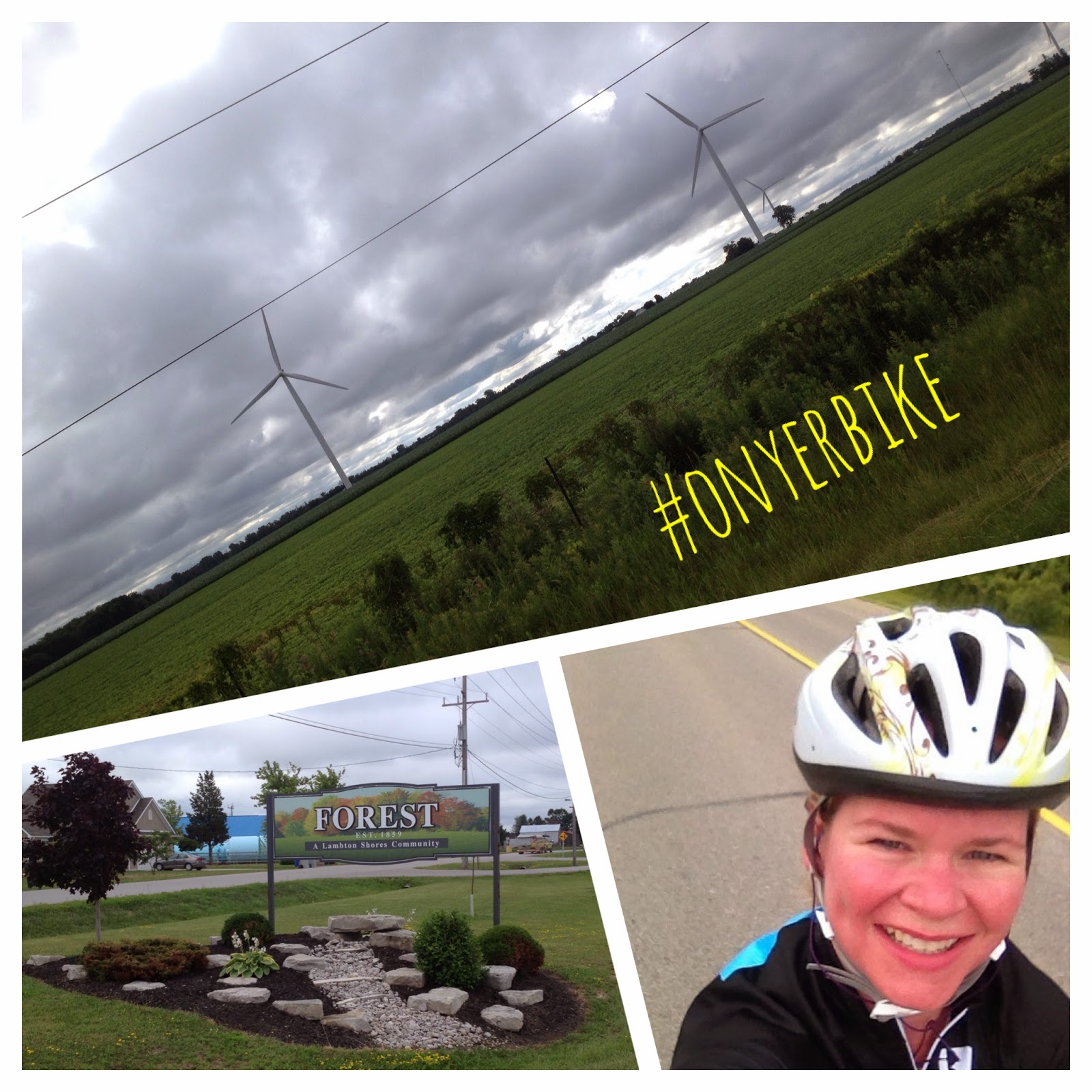 While I was on vacation (week 5), I mananged another 20k out and back ride from our campsite in Ipperwash Beach to Forest and back. The day was gloomy, and a bit windy, but it didn't matter. I loved the open country road with no potholes and limited traffic. It was a beauty ride and one that I'm proud I did. The fact that I was back within an hour made it all the better as I didn't take too much time away from my family.

The day stayed gloomy though, so I ended up taking the older boys for a 5k round trip bike down to the beach where they skipped rocks into Lake Huron. It was fun to have my own bike gang. 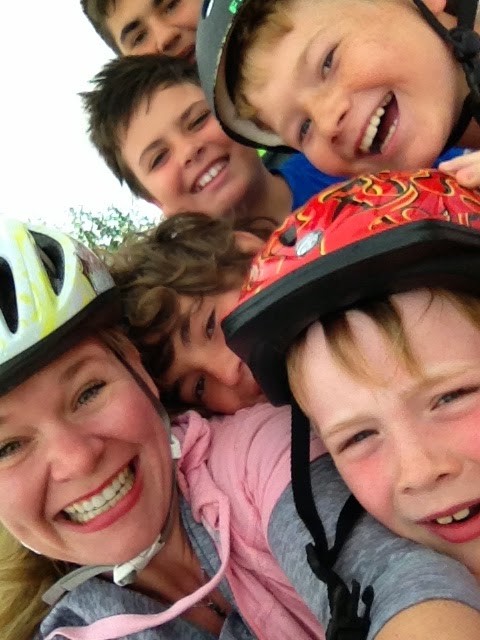 Vacation week (5), ended with what will be my lowest mileage for this plan at 34k combined. I don't mind. That's what vacation is about.

Week six started with a need to refocus. The run is where my difficulties lay right now, but that's a topic for another post. This week had its own challenges as my husband was travelling for work, and I had to cut out one planned ride, so instead I upped my Monday distance to 16k (which felt awesome and allowed me to hit an average pace of 24.4km/h) and planned another distance record ride of 65k for Sunday: 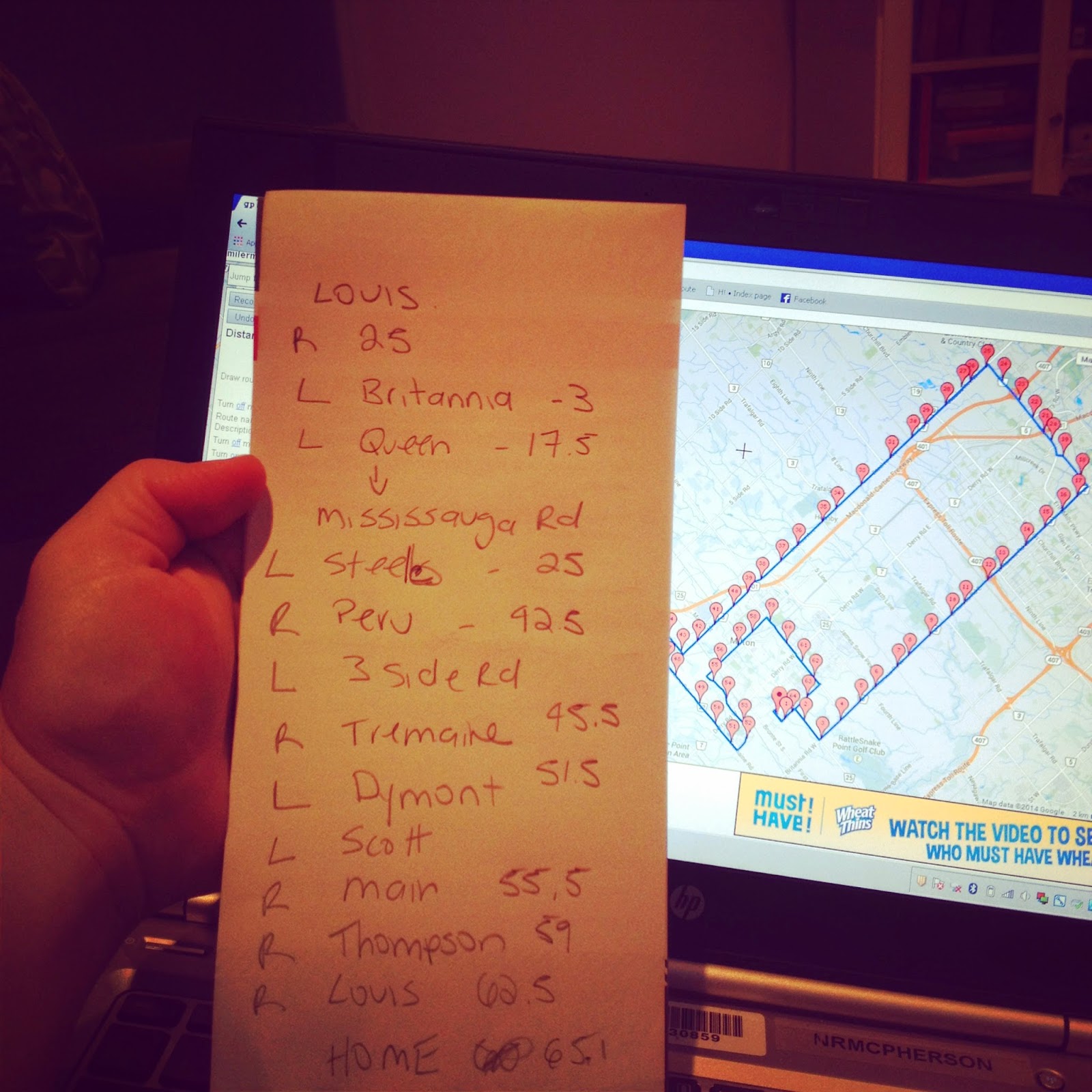 The day dawned with perfect weather. Little wind, cool and overcast when I headed out shortly before 0600. I decided to keep my route pretty straightforward and rode out to Meadowvale, hit Brampton and headed back into Milton along Steeles road. I took a break to eat half a Clif bar at 31k, in Hornby. 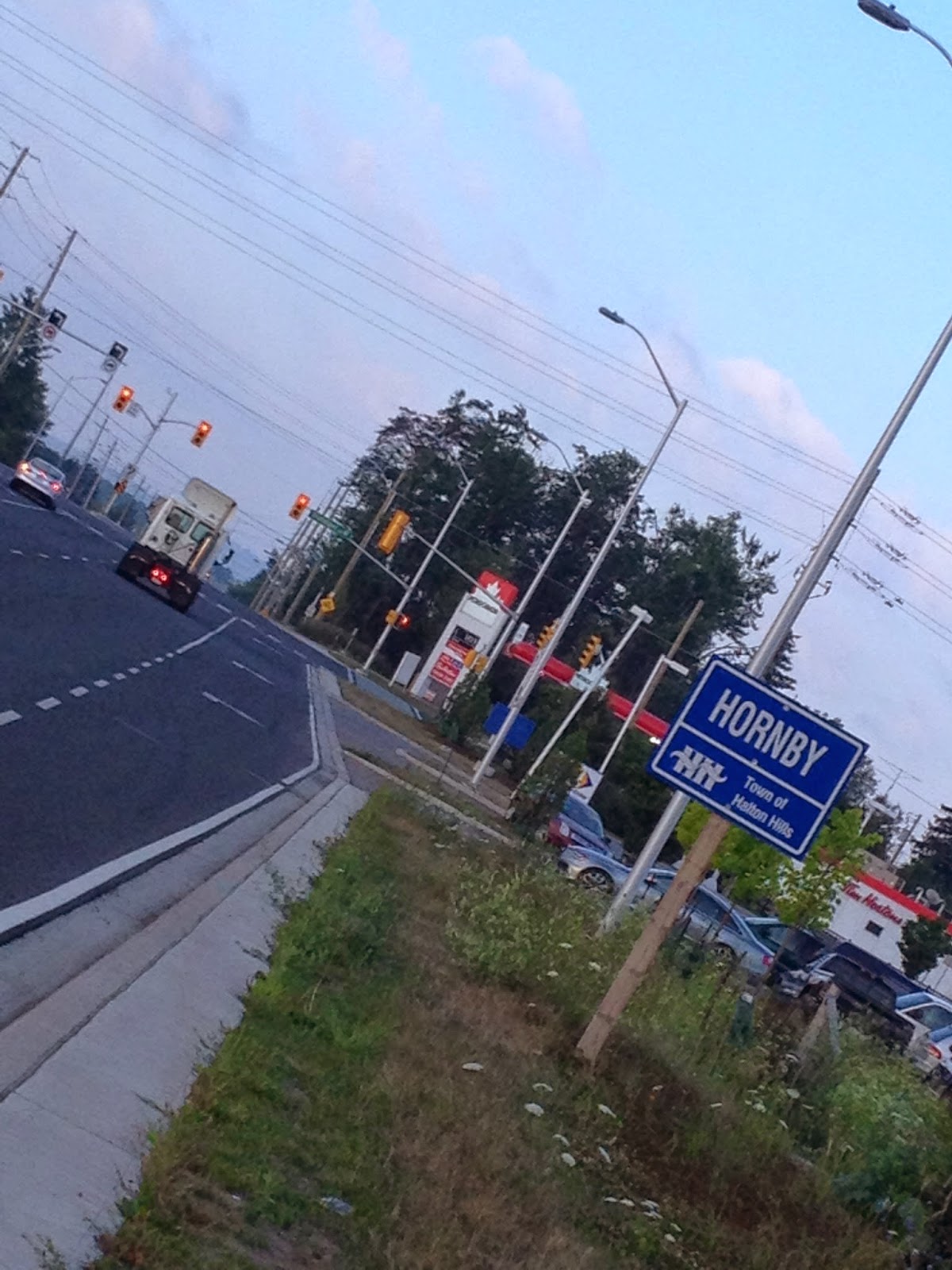 There was work on this ride, especially with some rollers once I was back out of the urban part of Milton heading for home. Tremaine Road from 3 Side Road to Steeles is particularly rolly, with inclines that still head up even when they are going down. However, this is good practice for the GranFondo which will see similiar (and worst) climbs over the last half anyway.

The reward of sticking with Tremaine was immediate upon taking off from the stop sign at Steeles though. Heading downhill, cranking hard I was joyful, singing along with Dave Matthews band at the top of my lungs. Glorious in the summer morning, feeling all of those awesome endorphin's of a good athletic effort and simply, being alive and able to do these things.

It was a good ride. 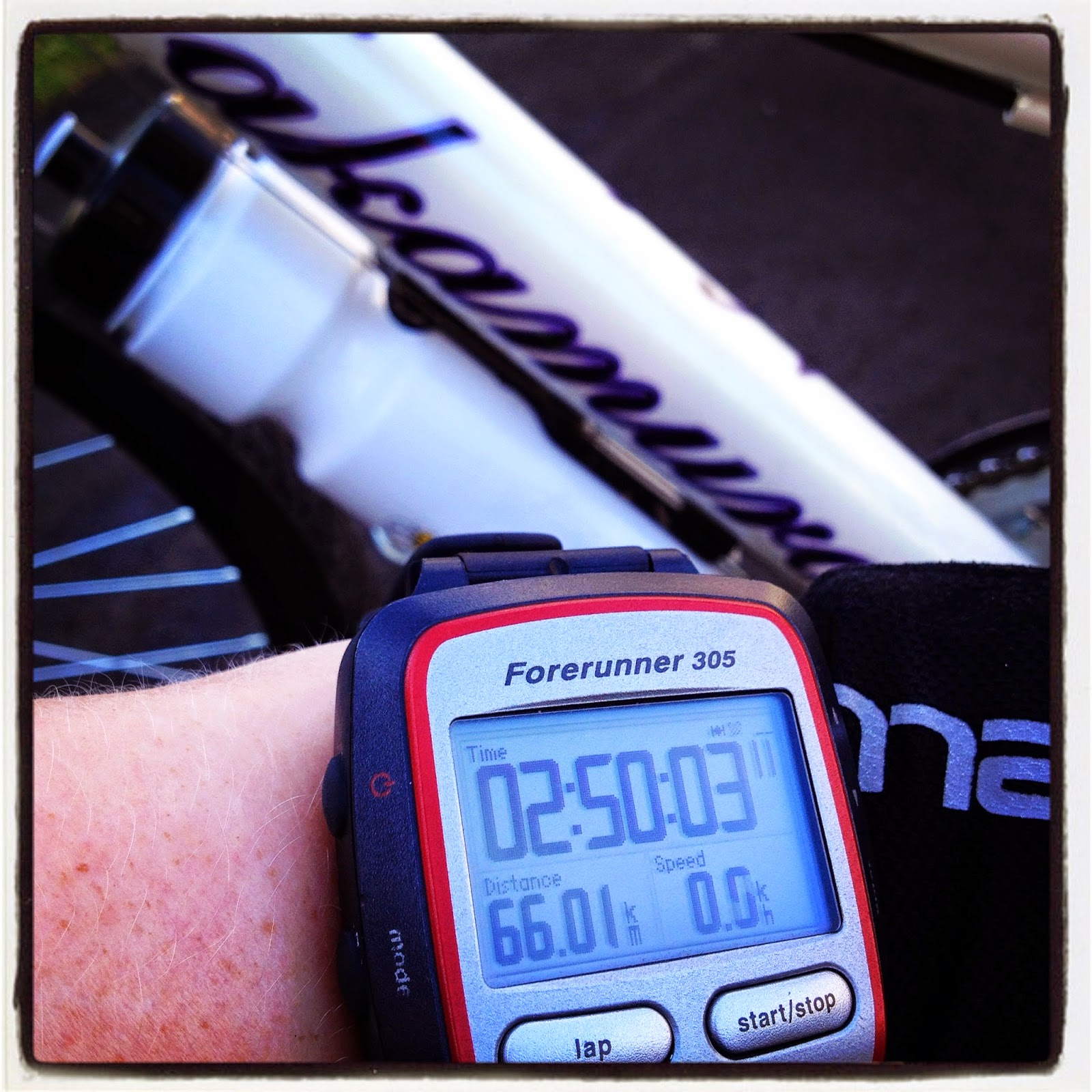 And now, the big bike update.

Mum-bike or no, solo or with friends, I'll be tackling a (metric) century ride this summer for sure. I figure, with the right course and conditions I should be able to finish in under five hours.

Last I posted, I told you all about my fall plan and the fact that I've decided to add cycling into the training regime this time around.

The cycling has been going really well!

I quickly went from a 25k personal cycling distance record to a 45k record in the next week when I joined Irina and her husband and a bunch of other people for a group cycle from Burlington to Stoney Creek and back again.

Sam's to my right and Emma is gazing into the distance. That's also Patty's bike in the front (we battled down for best mum bike around!). Patty was the first to turn back after about 12k as she was just learning how to bike and after that I was the slowest, but it didn't matter, Sam, Emma, Irina, Zindine and Kimberly all stayed back with me while I puffed away trying to maintain 20 km/h on the old mum bike. It took my 2hr20min to get through the 45k, but it was a great ride and I can't wait to join the big group again.

I also managed to fit in a real brick with 12k on the bike and 1.5k run right after. WOW. Do the legs ever move off of the bike. My fears about running in the diaper shorts were unfounded, but they DO heat up the ass some!

This past Saturday, I got skinny tires or slicks put onto the bike. I promptly set out to bike 50k on Sunday morning at 0630. WOW! What a difference those tires make. Plus, I finally put my chain and the big ring and plowed away. My top speed (downhill obvs) was 59.9km/h! I can't believe it! I even clocked along at 30km/h on my own power (but um, with a backwind!). In the end, I finished the long solo ride in 2h19m so you can see the improvement the gear has given me.

On the running front, things haven't been as good. I've hit my runs with 24k this past Saturday (alone and with at 0530 start), but I haven't felt strong. I've talked myself out of tempo runs and feel like I can't even maintain a sub 6:00/km pace anymore (which isn't good considering I'm the 3hr continuous pacer at the MidSummer Night's Run in August). I've decided to force my mind through the blahs though and just HIT the tempo or try my hardest to do so. I have a lot of time before the Oakville Half Marathon which is now 100% my "A" race as I got the good news today that I will be the 1hr55m continuous pacer at the Niagara Falls Half Marathon in the fall. Let's hope I have another great pacer experience when running by the falls!

And sleep. Lots of sleep!

This is a cutback week for cycling and next week is a full on off week as we are on vacation camping. I'm sure I'll still cycle and run while we are away, but the distances will be short and the workouts easy.