I hope you're rrrrrr-olling your RRRRRsss when you are reading the title!

What a fantastic race! I honestly don't think I could feel better about it at all.

Here's how it went down.

Kerry and I texted back and forth on Friday and Saturday and we decided to go out at marathon race pace (She's aiming for a 2hr half at Chilly - so am I, plus I'm training toward a 4hr marathon). She felt that it may be a bit too much for her for the entire 8k, but I knew that 5:40/km should be easy for me. We agreed that we'd evaluate as we went and cut each other loose if need be. It felt great to have a plan.

Race morning came late for me! I was just getting out of bed at 0630 when usually I'm almost on my way out the door for my long run at that time. Ahh, sleep! I got dressed, went downstairs to join my boys who were all already awake and ate my usual peanut butter and bagel. I even had a small coffee! I was feeling some stomach nerves which I thought was pretty odd as I was very confident that I'd have no problem with this race. I had such a bad pain in my left ribs when I was buttering my bagel that I had to squat down and do some Lamaze breathing to get though it (I guess you do use that stuff more then once twice). Once I ate, the pains went away though and I'm pretty sure it was just nerves. CRAZY!

I picked up Kerry and we were on the way by 0750. Traffic was non-existent and we were quickly at the high school start with Kerry exclaiming on the old building (she's a high school Phys. Ed teacher) and me smiling at all of the kilts. We got our race kits, and got our bibs on. I decided not to wear a fleece layer (thank goodness), but did add the socks my husband wore at our wedding: 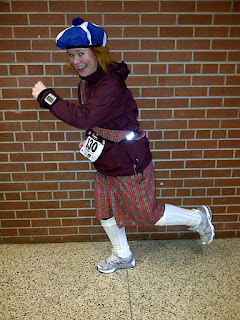 I got a lot of smiles and encouragement when people saw my get-up and it felt so fun to be dressed up and ready to enjoy the race. I mean any race with this guy has GOT to be good, right? 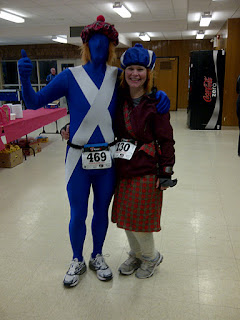 Soon, we were being told to head out to the start and as we did, we got to pass by the Halton Police Pipes band: 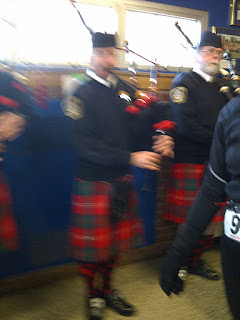 There were great and set the right tone for a fun, great race.

Soon, were were hearing the final countdown and were off! Kerry and I were pretty close to the front, but it was still very congested. I asked if she wanted to wait until things cleared out a bit or weave and get on pace. The answer was weave and we did until we were settled in with people running at the same pace as us. At 1km, my garmin lap showed 5:41 and I gave Kerry a thumbs up, letting her know we were bang on pace. 2k and 3k went by much the same way and I said to Kerry - "Only 5k left! Piece of cake; we'll be done in half an hour." Kerry was pleased to hear it and I was thrilled with my ability to keep the pace around the mark we set, adjusting for the slight downhill as we ran on toward the lake.

I can't really explain how great this race and pace felt for me. I actually felt the exact same way I did when I ran Mississauga: I was having fun, I was feeling great and I was running fine. At 6k, I asked Kerry how she was doing and she was struggling a bit. I told her how amazing she was doing considering she had not done any speed-work in her training cycle and that there were less then 2k to go! She told me to go on without her and I said I wasn't ready yet. We ran for a bit more before she told me that she'd have to walk soon and when I looked at her, I knew she needed the break. I told her that she could totally do this and then bid her goodbye as I picked it up for the next 1.5k. I was flirting with my pace around tempo for the last bit of the race and really turned it on in the final 1k. It felt hard as I kept being hit with winds when we crossed streets but I knew that the race was almost over and that there was no point in slowing down. I finally finished a race passing people in the final kilometre! Before I knew it, I had turned the corner, and was running to the finish, smiling all the way. I realized that I would finish right at 45 minutes and was happy with the effort and my ability to control my race from start to finish.

I'll be heading back to the race next year with an 8k PR goal for sure!