In the days before the Goodlife Toronto Marathon, I settled into a quiet nervousness that seemed appropriate given the task at hand. My body wasn't in perfect shape. My knee and IT bands were still not 100% (though a few Chiropractic sessions had helped, a lot), I hadn't made any gains on my core strength and the fasciitis was acting up in my left foot.

Still, I was confident. I had a great season of training behind me and I had nailed the last few long runs which ended at (faster than) pace. I would be at home the night before the start of the race and in full control of my diet and sleep. The weather was looking increasingly worst, but I took to heart the advice from the Canadian Elite runners I follow on Instagram and focused on controlling what I could control.

I kept my mind positive.


Race morning dawned as predicted: cold, rainy and windy. Still, meeting up with Sam at the carpool lot and Ivanka at the shuttle buses to the start settled my mind. We've done this before. Today, we would go for that elusive Boston Qualifier time, if not, at the very least, Personal Bests. So, out to the porta-potties one last time and here we go, time to line up, the race is off!

Racing: The First Half

First off, my Garmin went wonky due to being downtown, so pacing in the later half of the race is all a great big question mark. But for the first half, things were okay. We took off fast because we were following a pace band that saw us with a positive split, which is what Sam and I favour in races. We had a pace band from paceband.org that was also specific to the elevation of the course, so it was very helpful in knowing when we could slow down, stay even or push. Or, it would have been. If we had followed it.

It was hard to get on pace right away (as it always is) and so our first split came off too slow at 4:58. We were targeting an average pace of 5:16/km (8:28/mi) for a finish of 3:42:00. A BQ for Ivanka and me with 3 minutes to space and for Sam with 13 minutes to spare. No worries, we were still well under pace and lots of race to go. We made up for it, sticking together through the first 5km with an average pace of 4:57.

So this hill isn't bad. Really, considering its the only one in the race and it comes so early, its just one to get up and over and forget about. But I was struggling and felt my heart rate climbing. Ivanka quickly surged ahead (such strength!) and I knew Sam could of as well, but she stayed with me, even when I called a walk. I felt really comfortable doing so as I knew we had a buffer and I also knew we'd have tailwind at some point. No big deal, the hill was negotiated with a 5:41/km (9:09/mi) pace and off we went to tackle the rest.

My watch was off by almost 40m at this point so I hit lap, hoping it would reset itself. In hindsight, I wish I had just left well enough alone as by the end of the race the watch was just a pretty looking thing on my wrist. I couldn't trust it at all in those downtown buildings. Still, Garmin Connect shows some strong and consistent pacing here and I have to trust that we kept things in check until about the 12k point.

This is when I called my first of about four stretch breaks. My quads were fried. The plunging downhills so early in the race had come too fast and I was paying for it now. I stretched and prayed for more gentle rollers. Flats were hurting so freaking bad. Sam was fine with stopping. While the wind wasn't much of a factor yet, we were both soaked and this may have been the first of many times that we agreed, "this race is ass." 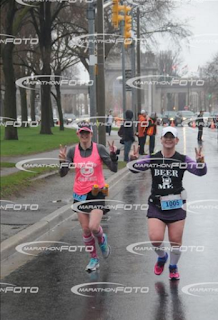 Surviving: The Second Half

After the half, we are in totally familiar territory for me. River Street, my folks old hood. Sumach: look right and there is the house my mum grew up in. Past the Berkeley Street Theater where I worked for a few years in sales, calling people to get them to renew their season theatre tickets. The Flatiron building, the Tim Horton's I used to stop at when I worked at Zenith. And on and on. This stretch was a bunch of holding on and having zero clue what our pace was. My watch was in the low 4s per KM. I couldn't judge a thing, so instead, I watched my footing on the streetcar tracks and hoped that the tailwind would be glorious.

At this point, I'm visualizing the 27k route marker that we saw on our way to the shuttle buses and I just want to get there. My only discomfort is those quads. Just brutal pain and I can't believe I just kept running. Sam's stomach is going off and she's digging around for Zantac to help. What a pair we are!

We pass through the Exhibition and I take out my ear buds to hear the finish line. Jerks. They are celebrating the winner's expected finish time, though he hadn't come in yet. I know a load of people feel discouraged by this kind of out and back, but at that point the distraction was 100% worth it.

We plod on out to Lakeshore and I'm mad that I didn't look at the map closer. I have no idea when we are turning back around and it sucks to keep pushing through the MGT in ignorance. I'm not sure when we made the decision to hit 10s/1s (run/walk), but we did. Sam really started to suffer and tried to push me ahead to a finish without her, but I wasn't hearing any of that. "Why? My goal is gone. We are on pace for you to PB. Where am I going? Let's do this together."

We see Kenny coming home. Man, he looks horrible. We see Mark (husband of Marlene); he looks defeated. God, this race is ass.

We finally make it to the turn around and understand why.

We catch up with Ivanka and lose her. Marlene passes us looking amazing.

At one point, a blister under my right big toe pops and its amazing because it gives me something other than the pain in my quads or the wind to focus on.

Sam and I don't speak. I don't bother with my music as the wind would make it impossible to hear. We walk through every water station and grab water and for me, Gatorade (yellow, gross). We thank everyone for their support. Many, many, many people tell us that there is beer and donuts at the end (there aren't. There isn't water either. This race is ass).

At the 41k route marker, I hit the sign as hard as I've ever hit one and scream, "Fuck you, Goodlife."

The woman in front of us turns around and agrees, "FUCK YOU is right!"

And still, we are on pace for Sam's PB.

And somehow we are passing 10 people. 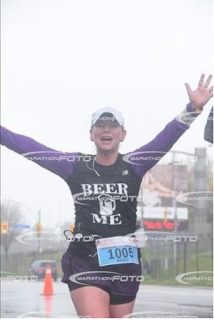 "This is horrible" I scream to the photographer. 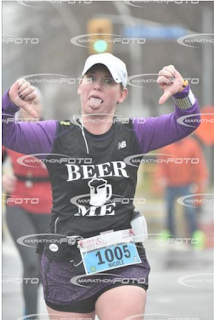 But still, we finish. And we get Sam her PB.