I. Can. Not. Be. Leave. It. (If you have a kid who likes the Little Einstein's you'll know that quote!) 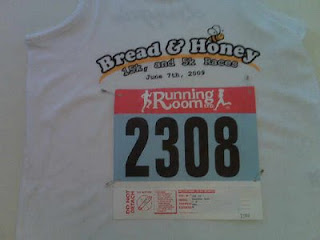 I guess I was much further off of the start that I thought.

So, after a great night with friends last night (which included loads of yummy cheese, dips, veggies, chips, BBQ pizza, salads, lemon mouse, yummy strong coffee and drinks - 1 Creemore, 1 Perry's Cider and 1 port for me), and a Catch Phrase loss for the girls (just call us the Penguins!), I went to bed at midnight.

I was awake around 3 when the kid called out from his sleep, but neither of us had to go into him and I quickly fell back asleep. The alarm went at 6am and I decided to let myself snooze, but was out of bed before it went off again. I had no idea what to wear so I put on a t-shirt with the technical shirt over it and my capri pants and grabbed a light sweater. Breakfast was two timbits and half a pita with peanut butter.

I drove to Streetsville and made my way to the start area to pick up my timing chip. It was cold, crowded and I felt odd being alone. I got my chip (which was on a velcro anklette) and put my water belt and Ipod on and went for a test jog to see what I thought about all of the gear. It was fine (or so I thought). At 10 minutes to, I decided that I'd keep my light sweater on (it was 12 degrees celsius, but threatening rain - which never happened), so I had to re-pin my bib. The chute got really crowded as it is a mass start with the 15 and 5k racers all starting at once. I hung out in the backish part.

Hazel was there to give a speech and shoot the gun, but I couldn't hear her (even with my earbuds out), so when I heard the count down but didn't see any movement, I wasn't sure what was happening. It was then when I realized that I was way in the back and I had to wait a bit before I could actually start running.

Once again, the Ipod totally helped me keep pace and not get roped into starting too quickly. I also got some great advice from my friend Rob last night (he who ran the Mississauga 5k in 19 mins with no training), he told me to just pick some runners in front of me and stay with them. I did this.

As mentioned in the last post, I ran with the new water bottle belt full, which was a mistake. I needed something to hold my car keys because I was all alone, but I didn't need the water. The belt pack was positioned all wrong and by 3k I was fighting with it bobbing and bobbing. Oh well, I'm sure I'll figure it out.

I took the first and second K's fine. Right before I saw the 2k mark, I saw the elite running racing by. It was AWESOME! The winner did it in 14:22!!!

3k was a water stop and I walked through it, least I snort water up my nose a second time. I likely paused for 15 seconds. I kept running, watching the older guy in front of me for pace and rocking out to HUMAN by the Killers (air drums and all!). The route was relatively flat with mild hills... one of which was right before the 4k mark. I ran it and started to think about walking. I argued with myself for a few seconds and then dropped into a walk for about 10 seconds before I basically told myself to SUCK IT UP! By that time, I had rounded a slight curve and could see the finish and so I headed for home. When I judged a few hundred meters to go I picked up the pace and told myself, "This is what you do at the end of every treadmill run! You CAN do this". I also saw the clock which was at like 30:15 (my gun and chip times were 54 seconds off). I pushed hard to beat 31 minutes but did not do it. I crossed at 31:05 and was happy, expecting a 30:55 or so time. The 30:11 AMAZES me! I can't believe I'm 11 seconds from my New Year's resolution! Now, I just need to find a July race. Yippee!