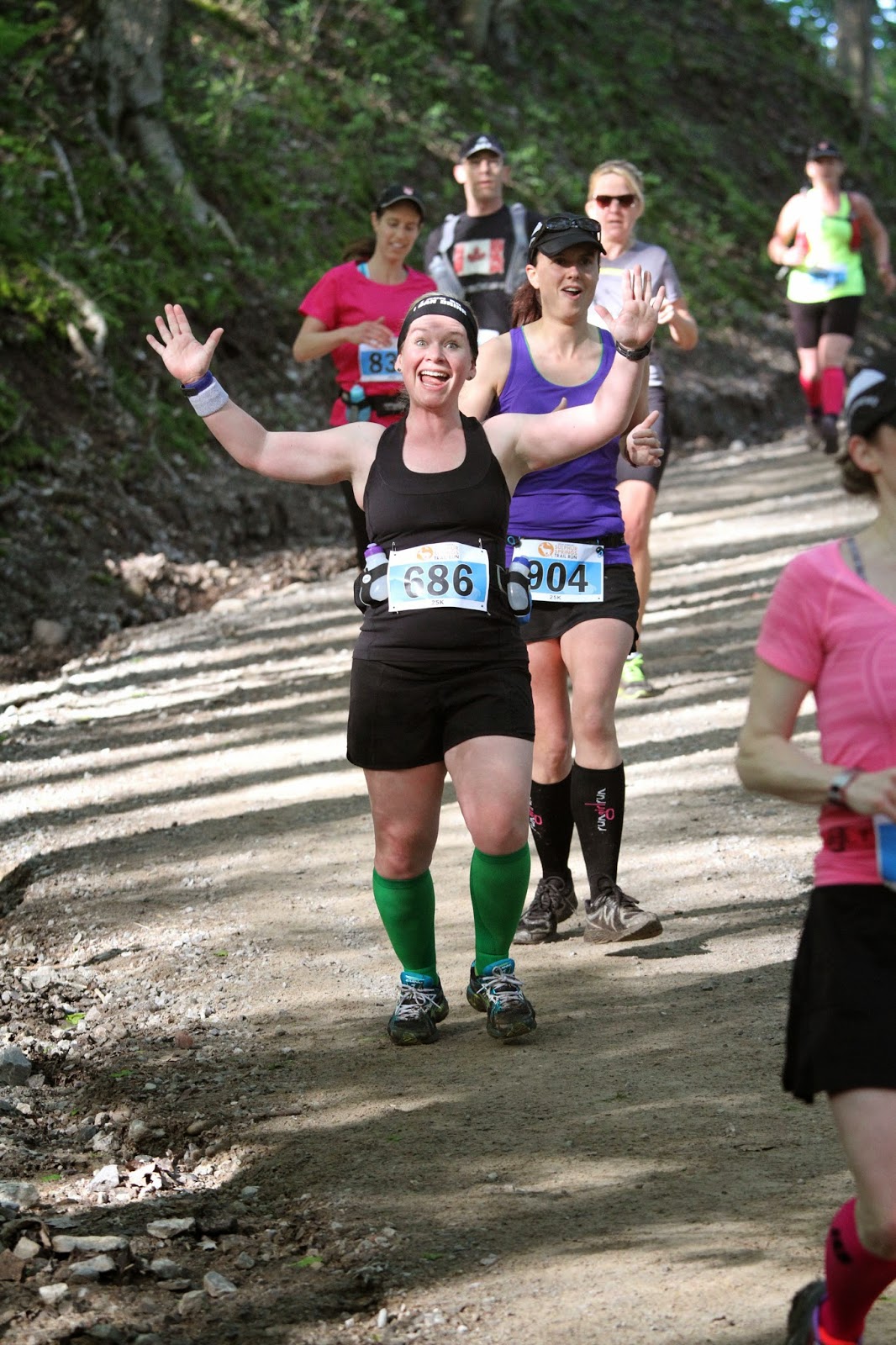 That photo pretty much says it all! On Saturday, May 24th, I headed out to Ancaster Ontario and the lovely Dundas Valley Conservation Area to join Bridgett, Emma and Sam to run the 25k portion of the Sulphur Springs trail race series. There were also 10k, 50k, 50mi (which Robin ran) and 100mi. Before this race, I had run trails all of once.

I can say with all kinds of surety, that this will not be my last day on the trails.

This race report will be like no other because there were no markers, no real accurate GPS, nothing but laughs and good times and hills and mud.

Bridgett and I headed out from Milton at 5:30 am, stopped at Tim Horton's Drive Thru for breakfast and coffee and were at the start area by about 6:20. Had I known we'd be so close to the start of the bigger races, I would have left earlier so we could have seen Robin off. We parked and wandered over to the tent to get our bibs and tech shirts (I like the orange!) and then hit the porta-potties. Back to the car and we sat in it for about 15 minutes waiting to hear from Emma and Sam and trying to stay warm.

Before long, we met up with the girls (and Kim who was running the 10k) and made our way to the start... behind the woman on the ladder! I was loving the casual atmosphere and the general feel of everything. We warmed up significantly while waiting 5 minutes for the race to start so we all dumped our long sleeved tops on Kim (second from right), who's race started later. I set the right tone for myself by wearing, "I run so I can drink" Bondi Band.

Then, the group surged forward and "We're starting? Like, should I just hit my watch? There's no mats? I guess its all gun time, eh?" You could tell my road-runner status by these comments but I immediately went into fun mode and went with the flow which was directly downhill. WHEE!! Sam tried to kill our buzz by saying something about running UP this hill another three times but we stopped listening to her, "Been there, done that last year" wisdom. I looked at my watch to find I was was running 10km/hr.

Turns out my watch was in bike mode. Whoops! I switched it over but didn't turn off Auto-Pause which turned out to provide some additional moments of levity in the race as during big climbs, my watch would often auto pause even though we were clearly moving... just vertically.

The route is not too technical and we were enjoying ourselves and the views. We hit a few muddy areas and some wet and muddy grass but nothing that we couldn't handle. There were jokes about all matter of things and I must admit, I got made fun of a bit during some of the more technical or uphill parts ("how's that 6min/km plan going for you, Nicole?") and we wondered how 97 previous road race Kenny would do in his first trail race (spoiler: like me, he fell in love). Of course every yellow bib that we saw, we looked for Robin, but we never did see her.

The aid stations were awesome and another thing I enjoyed. We weren't running to break records, so we took our time to pee (though I didn't need to) and eat the licorice fruit and drink coke refill our water bottles. I swear to God, I'll run trails again just for the food. Coming through the start at the end of our 5k initial loop was fun and rilled us up to go out again.

Out for the last 20k it was more of the same. Jokes. Hills. "Walkies." Mud. Laughs. Bridgett trying to pull some experienced trail runner move over a log into a pit of mud only to almost end up with her lulu top as much of a write off as our shoes.

And there was pure enjoyment.

In the last three kilometers or so, Sam and Bridgett ended up getting ahead of Emma and I and we declined to give chase. They were within their rights to get away from a man with a breathing pattern that sounded like a freight train and another man who hadn't showered since Christmas. Both of these guys passed Emma and I and its not like we were itching to give chase and hang with either of them. That and the fact that neither of us had run a whole lot since the marathon (what with our injuries) so we wanted to take it easy. In fact, that big hill we ran down at the top of the race? We walked it twice (close Sam!): strava tells Emma that the first time was in 6:42/km pace. The second (final) time? 8:56/km. HA. But we looked good doing it.

And then we're coming into the finish. 2 hours and 50 minutes after we jogged passed the lady with the ladder. And in my mind, I'm already signing up for the 50k next year.

So, when's the next one? Soon? I hope! This fall for sure. But that's a post for another day. Summer/Fall plans are firming up, but first I've got the Niagara Women's Half Marathon to pace on Sunday. I hope my trailrunner quads heal by then!
Posted by macnic at 10:00 PM 10 comments: 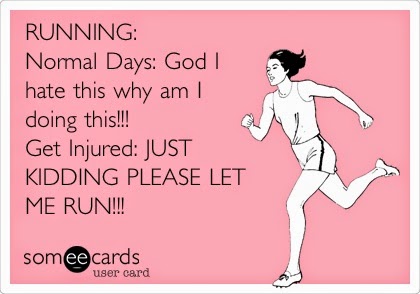 So I think I may have forgotten to mention that my left calf was cramped for the last 12k of the marathon which I ran on May 4th. I didn't really realize how bad it was at the time or even a few days after because my quads just hurt so badly.

However, now I know how much damage I've done.

I tried to run on Sunday (1 week post marathon) and I could barely manage a 6 minute kilometer for 5k.

A distance I've scoffed at unless it was a second run of the day.

I've watched some video of the finish of the marathon, and I can see that I was clearly limping from the calf strain.

This finally lead me back to Physio where the therapist massaged my calves and feet and then applied the laser and interferential current therapy on the bottom of my feet with heat on my calves.

I was not told that I can't run.

But I know it will just be painful.

I want to run so badly. I'm trying to get my ass off of the couch and at least do some core work... but meh.

I could get to the gym for other cardio.... meh.

This is like the shit icing on the shit marathon.

On the plus side, I've been selected to pace the Niagara Women's Half Marathon on June 1st. My time will be 2:05:00 continuous (5:55/km or 9:32/mi) and that is why I'm really taking my time to come back from this. I hope to be running by next week.

Slowly and short, likely but at least I'll be running.

Most people never run far enough on their first wind to find out they've got a second.

Let's play a game of contrast shall we? 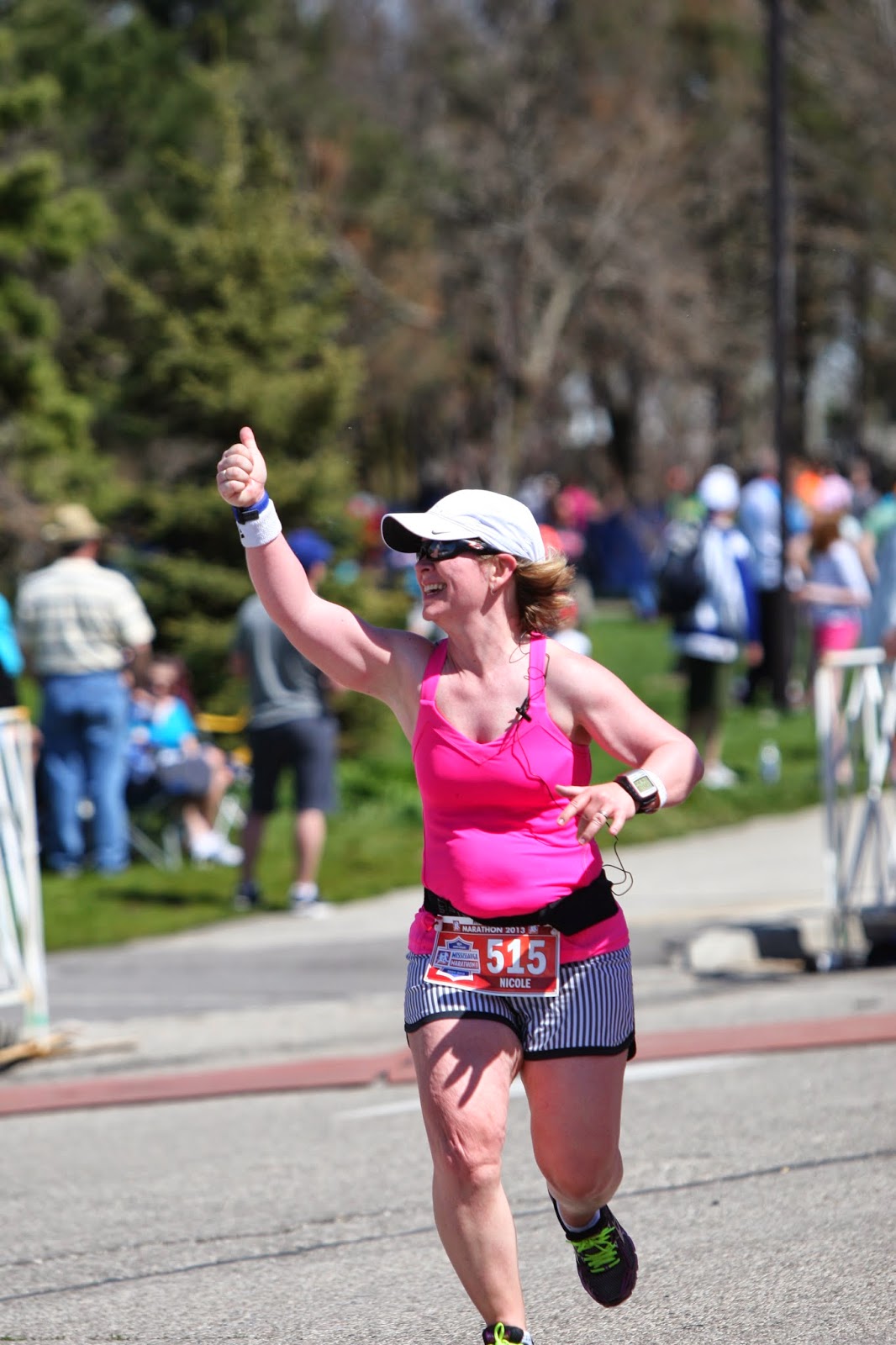 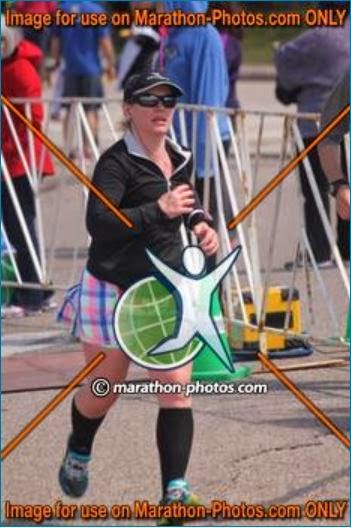 This is the story of my third marathon.

Has there ever been a more obvious post in the history of this blog? As if anyone who reads this (pretty much all of whom are friends I know if real life), doesn't know what my goals for this Sunday are.

But, let's put them out there, shall we?

I had two goals when I started training for this race, way, way, way back in November! We'll talk about the time goal in a bit, but the other goal was to raise money for Wishes For Olivia in support of Make-A-Wish Canada.

I wan't sure I would be able to do it.

I am ECSTATIC to let you know that I have raised:

In support of this cause and charity! I had 71 lovely friends, family and even strangers come out of the woods to put some of their hard earned money toward this cause which is so close to my heart and I THANK YOU from the bottom of my heart for your support.

Now, my other goal.

The one based on time.

Say it with me:

This time will qualify me for the Boston Marathon (I likely won't get to the start line, but... details)

But, I'm reluctant to put all of my eggs in this basket. I don't want this race to be deemed a non-success if I don't reach my above time goal. Especially when I've already had such success with my fundraising. And you never know what race day will bring!

Ultimate goal: Cross that finish line, smiling, happy and proud of what I've done. Because on Sunday, I will finish my third marathon. I will have raised a significant amount of money which will help make wishes come true for some deserving children. I will have honoured Olivia and shared her and her memory with others.

And all of that, regardless of what the watch says, is reason to smile.

See you on the other side of the finish.