Well! I figure as I sit here after the first official training week for the Fall that I should likely share my fall plans with all of you. Of course, as I learned this week, I can not be 100% in anything I've not yet signed up for as my oldest son has made the Rep Hockey Novice team and thus hockey and tournaments now take precedence over everything (kinda).

So, the fall plan has been written. Here are the first few weeks

If you click, it will go larger. As you can see, there is an equal number of bikes and runs during the week! 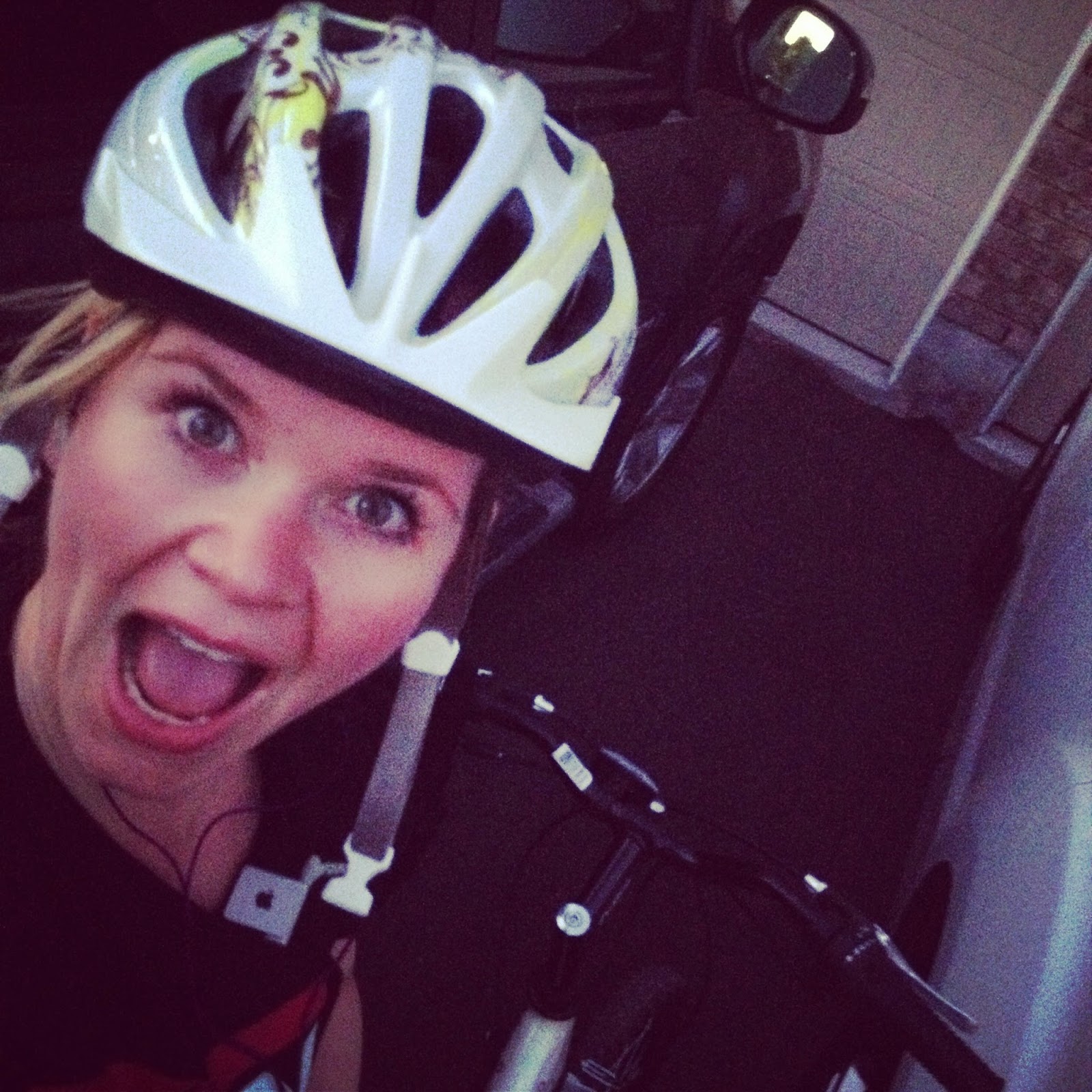 I KNOW! That's because I had to write my entire fall plan around The Epic Tour Halton (September 7) where I will be riding the 80k distance with my co-worker who talked me into it. Of course, I have this sweet mum bike to get me through and I've gotten speeds up to 22.2km/h thus far. Don't be too jealous!

But what else am I doing? There is quite a bit of running on that plan as well. In order, here is the plan:

Next after that, I'm hoping to run the 10k at MEC Race 4 (September 6). This comes the day before the Gran Fondo, so we'll see what happens. This 10k is also the basis of all of the early speedwork for the summer. Like during the summer of 2011, I plan to return to the track in order to gain the grounding in order to toe the line at this race hoping for a finishing time around 48 minutes. Sam's keen on the same goal, so we're using the same basic running plan.

After my Gran Fondo is in the bag, the plan ups the ante with four run days and one bike day a week. I also begin to add some goal half marathon pace into the long runs. There won't be much time to test out my newfound speed over distance though, because like Sam, I plan to take my first stab at going sub-1:45 in the half at the Oakville Half Marathon (September 21), after all, I had a great time running with Sam and Richard during the last 5k in 2013. This race conflicts with my son's first tournament. The tournament was supposed to be on September 12-14, however they had to change to September 19-21 and will be in Essex. I signed up for the race and the next day, the tournament got changed! My husband and I have chatted though and he's fine with me doing the race as I can't get a refund on my bib.

After Oakville, Sam, Emma, Bridgett and I will reunite for another 25k trail race, Run for the Toad (October 4). I'm hoping we can produce more awesome tampon commercial worthy photos 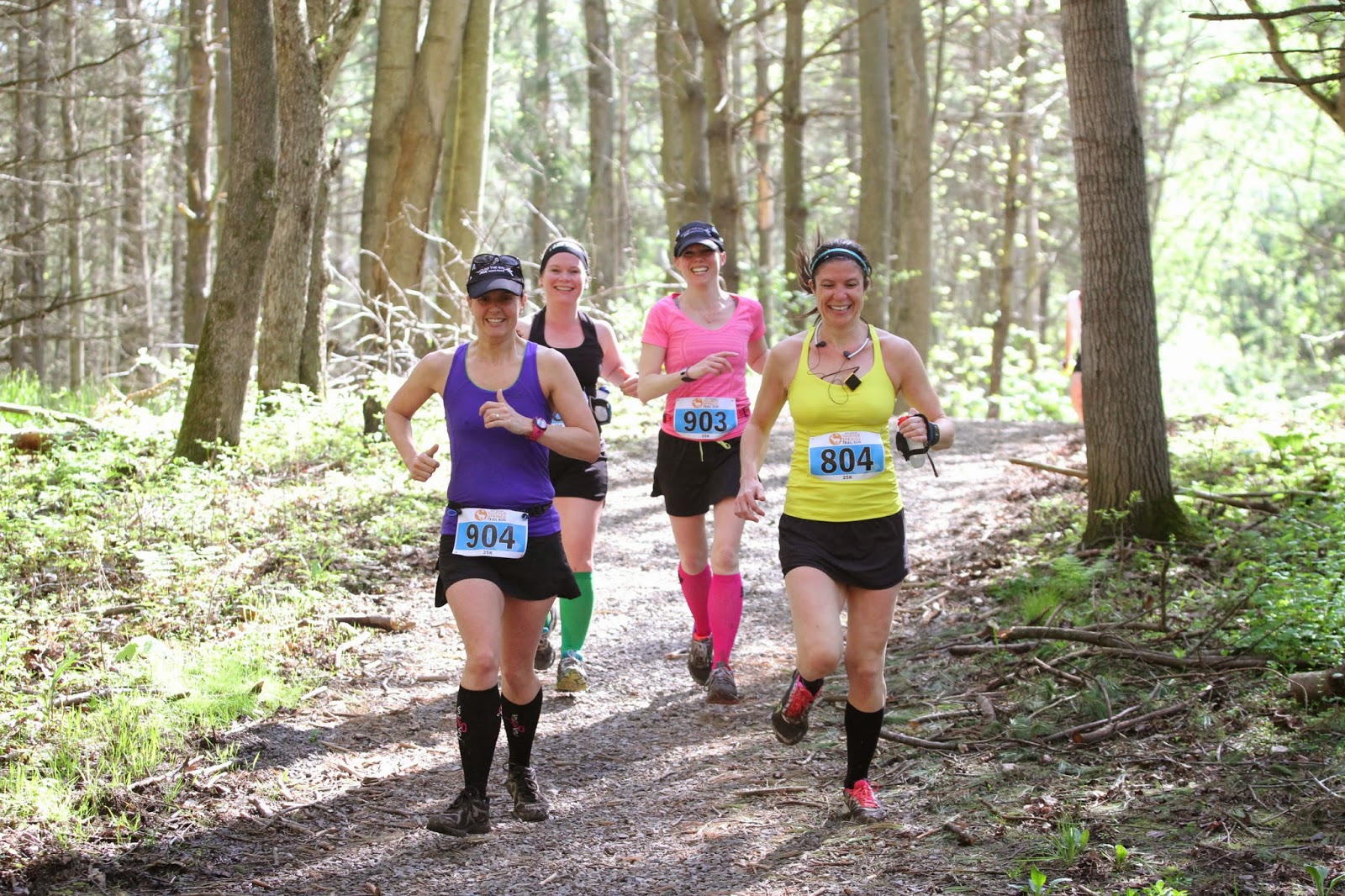 Finally, finally, there will be the now traditional, Road2Hope half marathon on November 2nd. Unless a hockey tournament conflicts. My backup in that case is the weekend before at the Niagara Falls half marathon. I've also put my hand up to pace Niagara, so we'll see what happens.

As you can see, I have a VERY full plan on the go. Of course, in my first week of training I've been able to get every workout in and have hit 83 combined bike/run kilometers for the week. This meant I was in bed at 2115 on Saturday night. Turns out massive amounts of physical activity and a party lifestyle don't really go hand in hand. But I'm okay with that. I think the biking will really help me keep my Plantar Fasciitis in check, plus everyone keeps telling me it will help with my running.

And who knows? I may just become a multi-sport athlete before you know it!
Posted by macnic at 9:03 PM