On Saturday, October 4, 2014 I had the pleasure to run the Run for the Toad 25k trail race in Paris, Ontario. This race went on my radar immediately following the amazing day I had at Sulphur and I was lucky enough that both Emma and Sam were game to pay the steep $100 race fee and run this one after they had done the 50k relay the year prior. Joining in was also Kim, who also was part of the relay team in 2013.

It was cold to start, but all of the girls ditched their coats anyway. I left on my long sleeved shirt even with my tank under. I was okay for the most part, but knew that I'd pass by my truck at 9k, so I could dump it if I wanted to.

The race started after the kids went out for their 1k and the 50k championship started. We were treated to the same cannon boom to start and the pipers played us out. What an awesome way to start! I got a bit teary because that's what happens when I hear bagpipes and then I concentrated on making my way onto the trail without falling. Right away, we were a bit crowded, but I knew things would spread out before long. I realized that I was a bit ahead of the girls and Sam was with me. More than once, we had to slow down which was smart. 25k is a long run and I hadn't run more than 21k since Midsummer.

I had a hard time with the early racing here. We were taking it easy, running when we wanted too, walking where we needed to. The start stop was really messing with me and it took probably about 10k before I was really able to settle in. I knew that we were in for a double loop, so I was looking forward to getting through the start finish again and counting down.

At 9k, I made the decision to dump my long sleeved, but I likely could have continued with it and I would have been okay in terms of heat. It was a strange day, warm but with cold wind gusts. I make my decision though and stripped down just in time for the photographer. At least the Zoom photo guys got a show as I stripped down. I've never run in this tank and I don't know that I will again. It matches that skirt perfectly, but its, um... a bit booby... 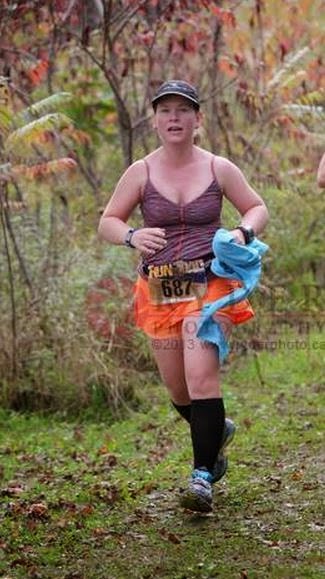 As we were coming up to the end of the first loop, we saw a set of paramedics in their little tent. "Hope you have an uneventful day!" I called as we ran past them, then we were directed back into the campground roads and I heard Sam say, "Oh! What a cute puppy." before I caught my foot on something and before I knew it I was sliding along the trail... on my hip, knee, and shoulder. 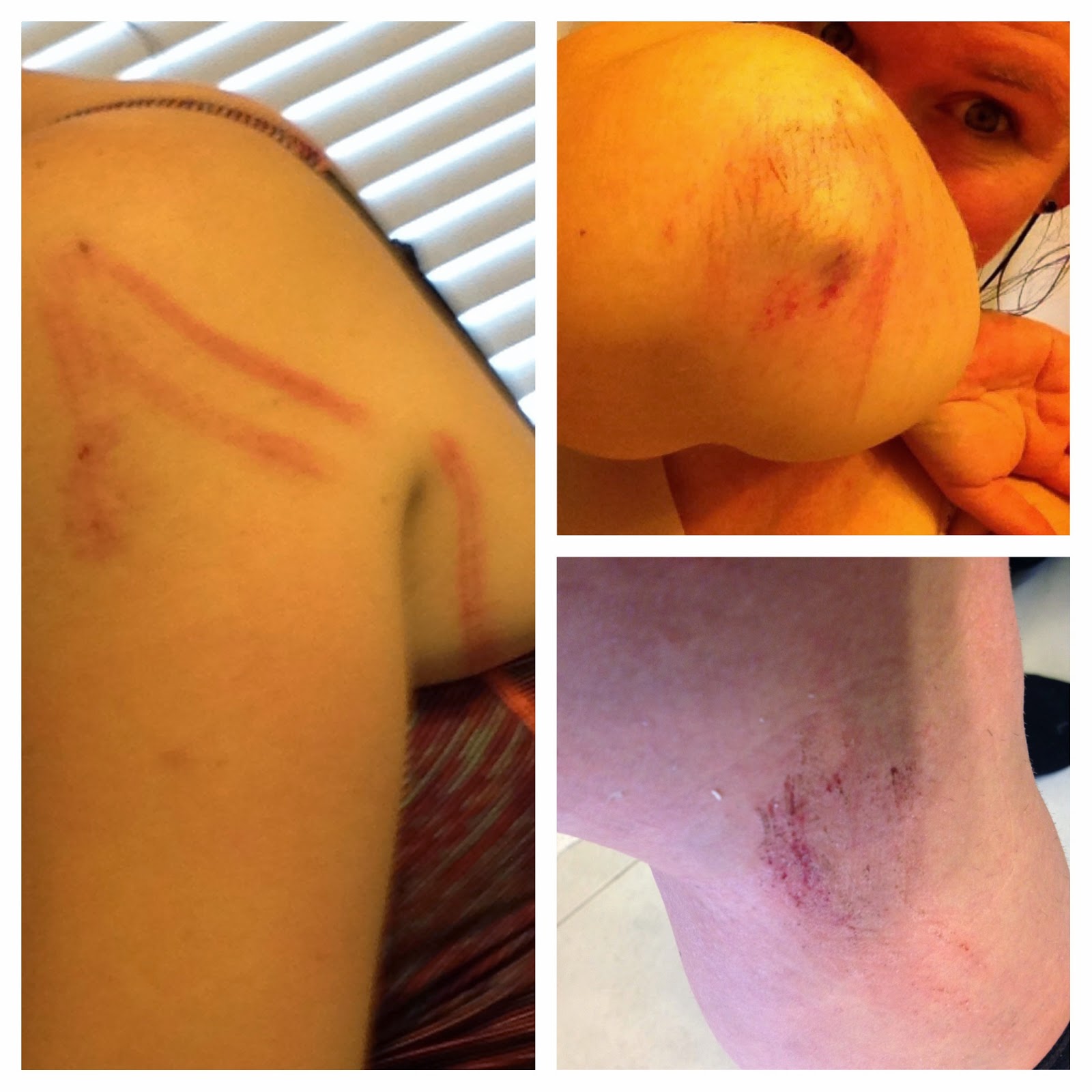 Quickly (as possible), I got up and shook myself off. The girls were concerned, with Sam giving me her lulu arm warmers to wipe myself off with and Emma and Kim worrying about the blood that was trickling from various parts of my body. In the end though, there was nothing to do but keep running. I felt fine, thank goodness, no wonky ankle or knee so I decided to keep on keeping on and hit up a medical tent at the start finish.

I did that while the girls continued on. The paramedics treating me were kind and funny. They kept telling me that they were just doing a patch job so as not to slow down my race and that I should head to the big med tent by the food tent after the race.

After my patch up (they didn't even look at my shoulder), I headed out to find the girls. I had a moment of panic where I couldn't see them at all, but thankfully Sam was wearing bright pink and I spotter her ahead. I likely ran my fastest paces for the second half of the race in this part to catch the girls. The second half of the race seemed faster, but was WAY more difficult. By about 16k, my shoulder, elbow, and knee let me know that I had taken a tumble and while the trails were not that technical, I was still struggling with the start/stop aspect that is normal with trail racing. 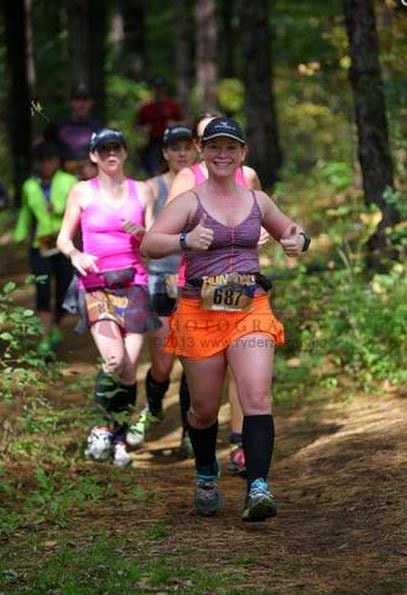 Despite a really bad cold, Kim was ahead of us by then and all she wanted to do was to finish the race. I hear ya, Kim! She would get ahead while we walked some (not-too-difficult-incline-that-we'd-totally-run-on-roads) and then we'd catch her again as our pace was faster overall. I tried to keep running more myself and kept anticipating the huge hill called skeleton hill because that would mean that the race would be over. When we got there, Emma went ahead to capture the moment and I let her know what I thought of this hill (and the dude at the top laughing).

And before we know it (its always that way, right?), we are coming through the end and I'm actually able to PB on the time compared to Sulphur, by 50s! WooHoo! 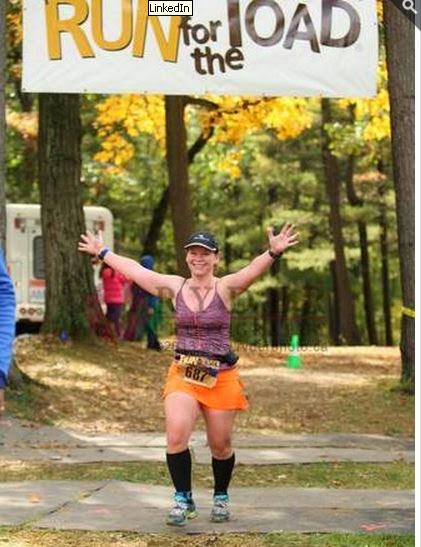 I was the last to finish. We all went to get our medals and some water (which I really needed along with food). We were all concerned about Kim, but she just wanted to get warm and get food. I couldn't disagree with that. I wanted to get checked out by medical, so the five of us (Kim's husband ran the 25k as well), went into the tent and I got cleaned up. It took a bit longer than we anticipated so the girls went back to the truck to get their warm clothes and mine and once I was ready to leave, we went off to find our amazing lunch of chicken breast, salads, Tim Horton's coffee and cookies and pie (if you're into that mushy-fruit vileness). We all agreed it was a great day even with Kim's cold and my wipe out. There is something so fun about running through the forest with absolutely zero pressure at all.

Not sure I'll be back next year, but I can pretty much be talked into anything if my fave running peeps are part of it, so never say never.

Next up: I'm pacing the 1:55 continuous group at the Niagara Falls International Half Marathon on October 26th. I've been dedicated to practicing my pacer pace of 5:27/km (8:46/mi) and am hoping to nail this one and go 3 for 3 on the 2014 pacing gigs.

Hope you're enjoying your fall!