Suffice to say, with week 10 ending on the high of the Chilly Half Marathon, I was eager and excited to tackle week 11 with renewed vigour.

The week started with Sam and I discussing if we should look at changing the harder workouts in the Pfitz-Douglas plan I had adapted from their Advanced Marathoning book. Suffice to say, after more than a bit of discussion, we agreed that we'd both do what works best for us, but that a few ending KM at race pace wouldn't go astray and decided to test the theory on Saturday's long run.

The rest of the week went really well in terms of workouts and pace. I nailed my 6x100s workout and ran my final split at 3:33/km pace - or 100m in 20 seconds. I know that my form was awesome and I could feel the difference ensuring perfect form made in the pick ups.

Wednesday was supposed to be 18k with 11k at half marathon pace, but as Sam and I had agreed to run at least 3k at marathon pace in the Saturday long run AND due to the fact that my legs were absolutely SHOT from the previous efforts, I ended up just running an easy 13k before work. The weather was amazing for March 9th and I was over dressed.

Wednesday was my work "Christmas" party and I decided to stay down town in order to ensure I got a really good nights rest. I left the party around 10pm, hopped into a cab and immediately sent him in search of McDonalds. I hadn't had much to eat at the party and sometimes you just need a Big Mac.


After an awesome 8 hours of sleep at the Strathcona Hotel, I woke up and decided to finish off my 18k run, with the final 5k on the Martin Goodman Trail. I had mapped out a route in Strava but basically just ran out until my watch said 2.5k and turned around and ran back. What a lovely way to run on a dedicated path in the city. It was nice to wave to the other runners who were out and also to see the city slowly come to life. Too bad it was a foggy (but warm!) day; I didn't get to enjoy all of my normal Toronto views 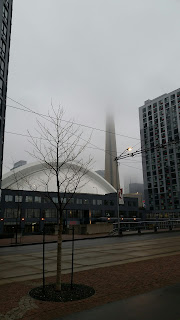 This run felt fine. I had felt a twinge in my right glute on the Wednesday morning run, but it was totally gone by this time, so I was happy to write it off as a one time random thing.

Saturday was long run day. Sam, Ivanka and I met near the lift bridge in Burlington to run the Around the Bay route, plus 2k for a total of 20 miles. We started at the 14k point of the Bay Race course which is awesome because it front loads the run with all of the hills which hit normally from about 19-24k. Right away, the run was a gong show. I forgot one of my gels on my front hall table. Luckily, Sam had a French candy thing from Zindine which was absolutely fine at 24k, but not something I'd go back too (just a taste thing). Ivanka and I were both running with the new Spi Belt Bottles and we kept losing them. Turns out, we were both weighted down too much to keep them still. Then, my ass was frozen. Like bad. Turns out one of the bottles had broken and spilled water all the way down my ass. Awesome. Finally, my left knee basically gave out around 12k or so. I had to stop every so often to stretch it out a bit and take Ivanka's emergency Advil to get through the run.

With about 4k left to go, I noticed a good spot for Sam's regularly scheduled Insta post and we laughed our way through yet another fun video capture


As soon as I straighten up, I knew I was in trouble. Right away, I told the girls that I'd start to walk a bit before running to give my knee some time to get used to the movement again. I started a light jog and fell into a good running pace again by the time they caught me, but soon after my knee buckled. IT Band Pain is real, yo! Sam yelled at me to walk the rest of the way, but I didn't listen. I did end my run right at 31k though when I made it back to the parking lot. I came home and took an Aleve, had a shower, rolled and taped up the knee as best as I could. 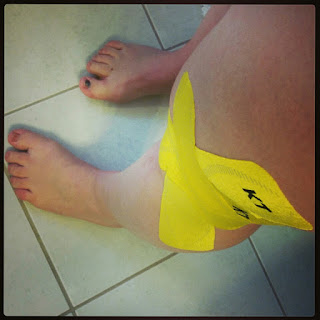 Yesterday I was still in some pain, but doing little jogs or lateral movement while playing catch with my son, didn't hurt, so I think (I hope) rest, a massage and more rolling TLC will do the trick. Oh and focused strength training as well. I guess. 7 days away from birthday 39 and my body is telling me that I need to focus on the TLC part of running too.

Needless to day, there was none of the planned 60 minute recovery bike yesterday, but I hope this is a mere bump in the road and recovery will come quickly.

Totals on the week:

Email ThisBlogThis!Share to TwitterShare to FacebookShare to Pinterest
Labels: Around the Bay, BQ Training, friends, injury, IT Band, Marathon training