At least I went for it?﻿

On Sunday I ran the first ever Milton Half Marathon! It was amazing to run through MY town and enjoy seeing lots of runners I knew and of course racing with Ed Whitlock who also lives in Milton. Ed? He did amazing, setting the world record for the half marathon for men over 80! Me? Not so much!

The start - Might as well line up with One-Fifty

On Sunday, I rolled out of bed pretty much as sore as if I had run a half marathon the day before. My legs were killing me as I had played one game of softball Friday night and three games Saturday. I went through the usual routine of getting ready, eating a bagel with peanut butter and gathering my stuff. When I brushed my teeth, I took the last Advil that was in our house and headed out to the start. I quickly meet up with Phillip, Emma and  ﻿Alan and we all did our pre race things and headed to the start. While I knew that I was tempting fate with my sore legs, high on adrenaline and Advil, I decided to join Phil and line up with the 1:50:00 pacer. After a great rendition of O Canada, we were off!

I started off with the group and the pacer asked, "So who is running One-Fifty with me?" Lots of people answered. I just said, "I hope to." Which got some laughs from the men around me (the whole pace group was me and a bunch of men well over 6ft tall - that should have been my first clue that I was out of my element!). We headed out down Thompson and were hitting the first planned water station before long, right on pace. At the water station, I saw a lady that I was sure I knew. She had passed me but I speed up to tap her on the shoulder and it turns out, it was Bela! I chased her for a long, long time and every time we hit a water station right were it was planned, I thought that she would be happy considering her adventures in Quebec! Right from the start of the race, I knew I had made a mistake going for the 1:50:00, but I stuck with the group for 5k before I told myself to let them go and to slow the eff down. My concession to myself was that I'd keep the pace in the 5:20s and hit the 1:55:00 goal instead.
5:14-5:10-5:10-5:15-5:20-5:24-5:22 total time: 36:55, pace band (1:55:00): 38:09

By 8k, I was still feeling okay and settling into the new normal in terms of pace. To be really honest, I was running by feel quite a bit more than I ever had in any race. I just didn't feel like checking my watch. I felt in control and was pretty sure I had 1:55 in the bag at this point. While my legs hurt like they never had at this point in a race, everything else was absolutely fine. I decided to take my one and only gel somewhere here and had to stop to dig it out of my spibelt which paused my watch. When I went through the next water station, I also stopped and refilled my handheld. This was my first time racing with it and I really loved having it! I think I will have it for Niagara as well. Once we passed the plaza at Thompson and Louis St. Laurent, I knew that my husband, kids and friends were close. The path that we were running on runs parallel to the sidewalk with grass in between. As soon as I saw them, right where they said they'd be, I jumped onto the sidewalk and started waving like a mad woman. Fergus started racing toward me and I grabbed him and then Alasdair was there and we ran along together for a bit: 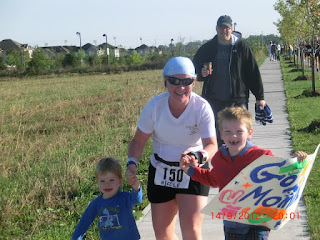 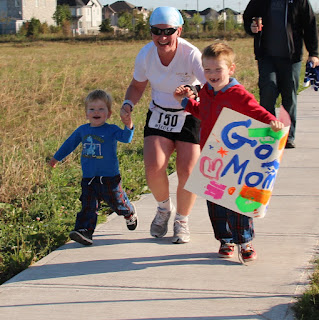 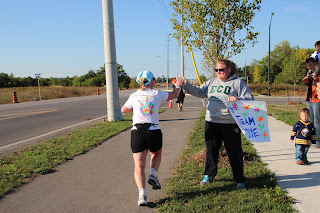 A quick hi-five for Jenn, who made the signs (she's totally crying!) and I'm on my way! 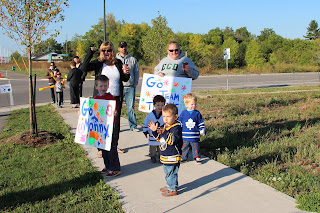 Thanks to all of my "fans" who came out to support me and team Tie-Dye!

Once I past the kids, I felt adrenaline leaving me in droves. I started looking for the 11k marker and started shouting at myself. "10k. 10k left. Nothing. Let's go, Let's go!" I made the turn down Farmstead and starting thinking about walking. I walked for about 45 seconds and started running again. "Okay, okay. 10 and 1s. Let's go! You've run a marathon." I looked at my watch and the time was 1:04:XX. Okay, 1:14:00 was my next walk break. At this point I saw the 1:55:00 pacer pass by with Alan. I decided to not let it get me down as I was running my own race. At this point my watch was only being looked at to determine when the next walk break was. I had a bit of pride left in that I wanted to at least finish under two hours but I figured I'd REALLY have to blow up to miss that one.


By 15k, I was in an odd place. I was so close to the end, yet so far away. I was running well and missed my walk break at 1:14:XX so I just continued to run along. I stopped two more times to refill my water bottle which paused my Garmin and began to drink Gatorade at the drinks stations. I hi-fived every single person I saw and shouted, "Milton! Milton!" at everyone as well. My legs were dead but everything else felt fine. When you think about it, I had done at least 252 squats over Friday and Saturday while getting ready in the field for balls to be hit, plus running the bases which is really just fast sprints. It is no wonder my legs were dead. The good news is that I am 100% sure I'm ready and able to run a 1:55:00 or faster half marathon, just not on this weekend. When we crossed over Thompson on the way to the final Tupper loop, I saw the 1:40 and so on pacers and looked for Phil and Alan but didn't see either of them. Many people were running strong and it was awesome to see the quality of runners that my hometown had brought out. All of this time I was playing cat and mouse with a middle aged man who was rather hobbling along, stopping to walk and drink and then continuing to run. It was a bit annoying, but I made myself keep up with him because I knew the pace was fine. I did not look at my watch. I totally gave up on time. It was all about running. By 18k, I was counting the kilometers down, per my usual strategy to push through. On Coxe, I started running a bit faster and was running with an Asian lady and I told myself to not force the pace, to run my own race. At Coxe and Childs I saw Henry, a member of the Winston Churchill Running Room group who was volunteering. I had seen him at the 5k/half split and given him a hi-five and he was at this point to help runners he knew. He ran with me for a bit and I told him I was hurting and that I couldn't talk, but just having him with me with his fluid, graceful, barefoot stride was what I needed to get to 20k. He is such a great, quiet motivator. I hit the 20k sign and Henry left me to reel in the next person and I started to book it down Thompson, passing that same Asian lady I had let leave me just a kilometer earlier. I pushed it up the final hill at the underpass and rounded the corner onto Main determined not to slow down. When I saw the crowd, I started waving my hands up and down to get loud cheers and shouted, "MILTON! MILTON! MILTON!" 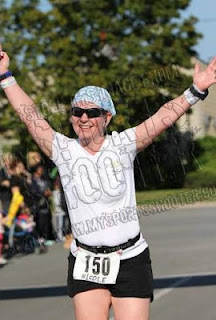 ﻿
I crossed the line, happy that I had at least finished under two hours and elated that I was finally done! 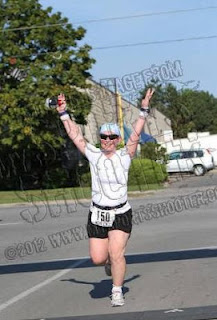 I quickly found Alan and Phil and found out that they both hit their goals and PBs! WooHoo! Go team Tie-Dye! We headed out to watch for Emma and before long, she was rounding the corner heading to the finish line and smashing her record making team tie-dye 3 for 4 with the PBs on this day! It was most excellent to celebrate with everyone finishing and I loved the number of people who stopped right before the finish to hug their spouses or drag their kids across the line with them. I would have loved to hang out longer, but I had to go. I had a baseball game at noon! I went home, said hi to my mum and Fergus (Ken had hockey, so mum was babysitting), showered and then headed out to baseball with Alasdair and a ham and cheese sandwich. No Advil, Alan - we were out! Baseball went well, but we ended up losing 7-3 after a very close game. I made contact twice which amazes me and that run to first was hell on earth.

I LOVED THIS RACE.

Of course, it was in my town and I saw so many people I know plus my friends and family came out (with signs!) to cheer for me, but beyond that I thought it was so well organized with great parking, water and Gatorade where they said and perfect traffic control as well (no streets were shut down). I have already contacted RS Races on Twitter to tell them my pleasure in running this race and I will be signing up for sure for next September. I can only hope that we can grow team tie-dye and take on new PBs!