Well, week 16 just rolled along. Really, it was pretty much a normal week at the end of it all. Nothing to report here, its all starting to run (hee) together.

Monday March 10th: Rest. After 29k the day before, I deserved it.

Tuesday March 11th: Wake up in the AM and head to the gym for Tuesday Treadmill Tempo! (its kinda my thing). I wasn't feeling it too much, so I only ran 4x 5 minutes at tempo pace, with 1 minute walking rests. I was supposed to do 6. I also ended the run after 8k, but was happy to learn that was what the schedule actually called for. 8k, 44:41

Wednesday March 12th: It was supposed to be hills day but we got 20cm of snow so hills were cancelled. I DID bring my shorts in the car so I could have gone to the gym, but getting home was a bigger priority.

Friday March 14th: I wanted to put down another tempo run, but I knew as soon as I rolled outta bed that it wasn't going to happen. Instead I just ran easy on the treadmill at they gym (it was still super cold out). 10k, 59:05

Saturday March 15th: I spent some time on the phone with my Running Room leader Chris on Friday, trying to figure out the new Around the Bay route and a safe way to run it after Emma had posted that the first 10k were likely unsafe to run on non-race day. He lives in my town and mentioned that his planned 10 miler would probably start around 9am and go down a certain street. I live in the opposite direction from him, so I also started at 9am and ran down that same street, hoping to see him. Turns out, he slept in until 11am! (oh to have adult children!!!). It was an amazing run in only a long sleeved shirt!!! Spring is finally here! 11k, 1:03:21

Sunday March 16th: Not so fast on the spring call. Woke up to -25 with the wind chill on our Around the Bay practice run day. Hey, that course isn't exposed at all is it?

I got to the meeting place at La Salle Park with enough time to run to the bathroom for one last pit stop. My legs froze. Then Chris, Ivanka and I headed out to tackle the course together. Its kind of nice to start at La Salle as you start at some of the hilly bits of the race. Just some though. Remember that.

So, we run along and Chris and I are telling Ivanka about the race lore and the little guy with "We Will Rock You" and the grim reaper and then were running in downtown Hamilton and man, its boring as hell. Chris starts joking around about how bloody long the 9ks of (very easy) straight running are. Ivanka and I take gels at 10k (and 20k) and Chris hits an allyway to pee (it IS downtown Hamilton after all). 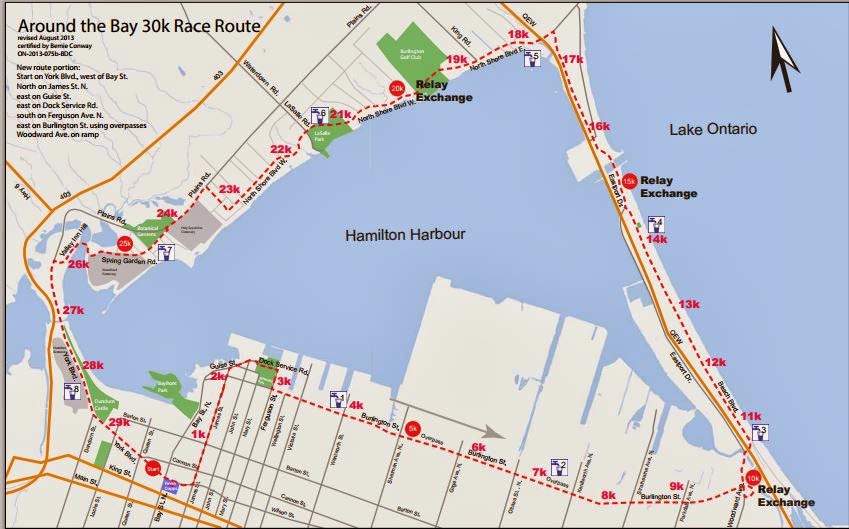 Then, we turn onto Woodward.... and get hit with the train that caused the whole route to be changed anyway! We walked up to it instead of running up to it and we ended up not having to stop at all which was good. Just before the turn onto Beach Blvd the wind hits us. And the wind just pounds us for the next 11km. So we run with a headwind from 13 to 24km. At this point, I'm so tired and my upper back and neck is sore from hunching into the wind. Chris has moved ahead because he's been running a lot slower with us and is feeling not as bad as I am and I tell Ivanka to go ahead. I start walking here and there, trying to keep to the run 10 mins, walk 1 min pattern that many people do during their Sunday runs. The worst part of the last 4k is that I know that the worst hill in the whole race is coming, the long, long, long climb to La Salle Park and our cars. And I keep mis-judging when its coming. MAN! Oh, did I mention that my iPhone died due to cold at 8k into the run (stupid Apple - make products that work in the cold!), so I'm alone, I hurt, I have no motivation in the form of music and I've been walking (albeit in a controlled manner). Finally, I'm at the very last climb to La Salle.... and .... I can't. I walk for 500m and then pick it up to a jog because there is no way I'm letting Chris and Ivanka see me walk into the park. Phew. If the actual race is that hard, there may be many o'gods cursed, I tell you. 30.5km, 3:05:50

Next up is another 85k week and then a bit of a rest/easy/taper and I'll race Around the Bay for the first time ever. More on that, later.

Hope you have a great week!
Posted by macnic at 9:13 AM