Well, the time is here! On Sunday I will run my second "A" half marathon of the year. I had originally signed up to run Niagara as a fun run with my friend Julie who has been recovering from surgery most of the year, but wanted to go for a PB at around 1:56ish. Then Julie tripped while running and broke her foot! :-(  Needless to say, she is not running this weekend (but her cast is off and she's on the mend). Around the same time, I convinced my neighbour Bridgett to sign up to run her first half marathon. I figured I'd run with her instead. Then, my first "A" half marathon happened and I fell apart and I decided to make this race my goal race. Bridgett? Something tells me she will cross the line before me.

So, I actually have a plan which I've thought out to utilize Bridgett's ability to increase her pace as we get closer and closer to the end of a run. First, take a look at the elevation map of this race: 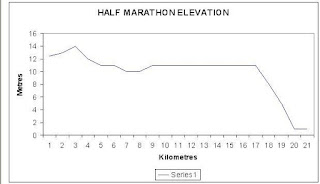 So, the plan. I'm going to start at a 1:55 pace (5:27/km) and keep Bridgett there as well (this is why she's running with me, so that she doesn't go out too fast and die at the end). Around 11-12km, if we're feeling good I'm going to slowly begin to decrease the pace, but smartly. The plan is to never run faster then 5:20/km at this time. At 16-17km the downhill starts and that is when I'm going to let it fly. I fully expect Bridgett to leave my here. She is seriously fast and if she is able to shut off her brain, she should smoke her first half marathon. 20-21k is a flat, but hopefully it'll be full of spectators (including my friend Jenn and her mum!), and my goal is to bust out and run as fast as I can, crossing the line with my A+ goal firmly in hand.

See you on the other side of the finish line.
Posted by macnic at 9:00 AM

Email ThisBlogThis!Share to TwitterShare to FacebookShare to Pinterest
Labels: Goals