Well, I had a feeling I had it coming. After so many good, good races where things fell into place and personal best's came with ease, after a fantastic marathon debut, I finally ran a race which fell apart.

Welcome to my Niagara Falls Half Marathon Race Report. I promise it gets less melancholy from here!

On Saturday morning, I woke up not feeling the best. I braved my way through the start of the day and did the normal things (Fergus' class, deli shopping, lunch eating) and then the rock hit my stomach and the chills hit my body. My mum had come over to hang out while my dad watched Alasdair's hockey practice and I pretty much was the worst company ever, dozing on the couch and having her entertain Fergus.

Ken got home and I went up to bed for a nap! I slept for 1.5 hours and then got up, made dinner and forced myself to eat. Once the kids went to bed, I forced down some crackers (carb loading), laid out all of the stuff I'd need for the morning and went to bed. UGG.

I woke up and felt... okay. I assessed that I was fine. I took a shower (first time I've ever done so before a race), got dressed and headed down to get something to eat. Except the thought of a heavy, whole wheat toasted bread and peanut butter made me want to yak. Oh well. I forced it down. I thought about a coffee, but didn't make any. I should have.

At the last minute, I added a plastic running room bag to my backpack, least I vomit before or after the race in Bridgett's car.

Yep, I was ready to race!

Bridgett picked me up and we were on the way with me trying to be all cool and encouraging and not puke while she chatted away sipping her coffee (BAH! I should have made one). I kept yawning and doing my best to stay positive for her. I drank some powerade and that helped a bit.

We parked and got the shuttle with no problem. We went to the washroom at the start and settled into a tent to wait. The tents were a nice touch and kept us warm and out of the wind, but we had to stand as the grass was horrible and wet. And cold.

I met up with some of my running room peeps and chatted and then we went to the start, sung O Canada and waited for the gun.

I felt tired, but hyped up and was ready to go for the 1:55 per the race plan I had outlined.

I decided to put my nightmares from the night before out of my head. You know those ones, where you pull a Paula Radcliff, but its not just pee? Or when you end up trying to outrun the sweeper van?

Nope, I didn't think of those at all. I just put my head down and hit start on my watch.

The first 200 meters or so were not bad at all. Bridgett let me lead and weave around the start to get on pace. We were doing great right off the bat in terms of pace and getting around people.

Quickly, I hit start on my watch. I kept watching and watching and ensuring the pace was on time and spent the next 4 minutes figuring out what the heck I would do to keep time and pace with my stupid watch off by so much. While I have my watch on autolap, I took a chance an hit lap at the 1k marker. The Garmin is smarter then it looks because it autolapped on the KM markers from that point onward. While I couldn't count on the time it was showing, I could count on the per KM pace it was displaying. I cursed myself for not having a separate digital watch with a simple timer. The next five kms flew by. And I mean that literally  We were at 5:10 paces much of the time and I kept Bridgett close and tried to keep her slow. We didn't talk because both of us were focused on the race, but to be honest I felt the effort right away with trying to keep the pace slower. My feet were so cold, they were lead until after 3k. They were just frozen and that sucked. By 4k in, I started to feel that rock in my stomach. If only I had made a coffee! Maybe I would have gone poo.

I was having both a physical and mental effort to keep with Bridgett and to keep her slow. I started thinking about walking. I didn't want to let Bridgett down, but I could see that she was doing her best to stay with me instead of run a race that felt comfortable for her. Finally, I pushed a bit, grabber her arm and slashed my hand across my neck, saying "I'm done. Go on. You're awesome." She booted away and I walked for the first time, admitting that the day was done for me.

As soon as Bridgett sprinted away from me with her graceful gazelle strides, I felt some of the pressure lift. I have no idea why I had said I'd run for my own PB with someone who was doing their first marathon. I guess there's a sucka born every day. Or maybe its the eau de mushroom farm which frequents Milton on our long runs. Either way, I was not prepared to stay with Bridgett and get that PB.

My stomach was still a rock. Every time I saw a port-a-potty, I thought about nipping in to try to go poo, but I knew that I wouldn't be able too and I didn't want to bleed time trying to crap. Instead, I decided to bleed time by walking. Sometimes, 10:1s and once a 6:1, but always the 1. I didn't sink so low as to allow myself to walk more than a minute. Even if some of my running paces felt like molasses. The 1:55 pacer passed me and I gave a fleeting thought to trying to stick with her. Then my stomach-rock contracted, threatened a turtle head and I declined to give chase. At least I was still in front of the 2:00 pacer.

The race course is excellent for a PB attempt. Straight, flat, drinks every mile. A little sparse in terms of spectators, but you can always look out at the Niagara River and see downtown Niagara falls coming toward you. I was making it through on these thoughts, the countdown to the end and the mental math when the mile markers came up (which were labeled for the marathon). I knew that if I got to 16k at around 1:28, I'd have a chance at a 2hr half with 5k to go. My 16k time was 1:30:59. Plus whatever I missed at the start.

From that point on, I started to look for my friend Jenn, her son Jackson (who is Fergus' BFF) and her mum Lee-Ann (they all came to cheer at Milton and I play ball with Jenn). I had no idea where they'd be except for "not at the end." So that kept me going. I noticed that I was with the same group of people and soon, the 2hr continuous pacer passed me. I'm not going to lie. This was likely the worst part of any race ever. I feel like I can run a 2hr half in style. I had run a 4:05 god-damned marathon and I couldn't even cobble together a 2hr half after a very quick start. Then the 2 hour 10:1 pacer passed me and slowed to his walk, walking backwards looking or people to pick up. How desperately I wanted to join him. But I couldn't. I couldn't get there.

I rounded a curve heading into the main streets of Niagara Falls (Canada) and finally, I saw Jenn. We had texted all Saturday and in the morning (I told her what I was wearing) and she asked, "You okay?" I sobbed out, "Its bad. So bad. Not a good day." "Its okay," she said with sympathetic tears welling up in her eyes, "You're doing awesome." I high fived Jackson and ran along again.

In fact, at this point, I told my stomach-rock to shut it, told myself to "Harden the Fuck Up" and I started to run a little faster. I saw the 20k marker and hit it (not as hard as I wanted to because I didn't want to knock it over). I started to book it, determined to pass as many people as I possibly could. I was especially pleased when I passed... anyone. HA! 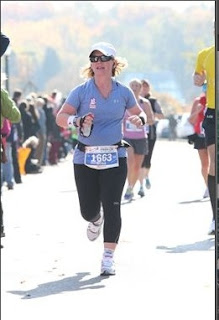 Niagara sets up corrals to bring you home. These were lined with people. People spectating a major race.

They were silent. Like, a pin could drop, you know? So I did what any desperate runner trying to salvage something good about a non shitty race would do:

I started waving my arms up and down, screaming, "C'mon Niagara! Let's get loud! C'mon!" If I had the Hulk Hogan, "Let's hear you." gesture down I'd have done that as well. Seriously people. If you're at the end of a race, you should be cheering your freaking ass off for everyone. Guess what? They need you.

As I crossed the line, I heard the announcer say, "Nicole wants noise!"

That's right, Mr. Announcer. But mostly, I just wanted to be finished.

And Alaho Akbar, I was! 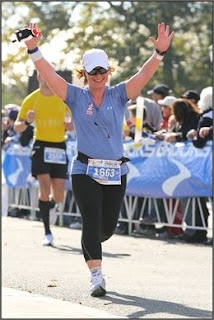 I told you, yellow shirt. I told you!

Bridgett? Oh, Gazelle long-legs finished her first half in 1:53:19 and 25/224 in our category. She was also my biggest cheerleader at the end. She didn't even get her water until I crossed the line.

The ride home, the aftermath and future plans

I did my best not to crap my pants in Bridgett's car. I tried to focus on her amazing day instead of my horrid, horrid one. I planted the marathon seed in her head.

After she dropped me off I finally was able to get rid of stomach-rock, but I felt poorly (and starved) for the next few days.

Well, I know that there has to be the blow-up races. Those that you take and learn from and go out for redemption from. While I'll run Hamilton next weekend, it won't be for redemption. Instead, I'll be pacing (for real) another half marathon newbie to a 2:15 finish (which stomach-rock and I can finish with ease, thank-you-very-much).