Yesterday I was lucky enough to be invited with a select group of colleagues to participate in a very unique run.

I got to run with two multiple Olympic medal winners from Canada.

Simon Whitfield was scheduled to show up for an easy 10k run with the select group after a speaking engagement with some VIPs and our organization the night before. Simon won the Gold Olympic medal in the Men's triathlon in Sydney (2000) and the Silver in Beijing (2008). He was the 2012 opening ceremony flag bearer for Canada in London and was one of our hopes for a gold medal at these games, but he crashed at the beginning of the bike part of the race and could not recover.

Before Simon spoke at the evening corporate event, he came in with his medals (including his Gold from the 2002 Manchester Commonwealth Games; he's lost his bronze medal from the 1999 Winnipeg Pan Am Games) to meet with our department, speak a little and pose for photos: 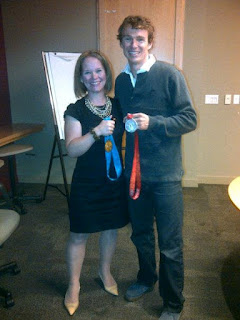 Simon insisted that I hold the gold medal

He was so down to earth and very funny (and let's not lie here - he is very easy to look at). He spoke lovingly about his wife and daughters and in response to a question, said his best relaxation includes tooling around on his bike with his daughter(s) in the bike trailer behind him. He praised his wife's commitment to his pursuit of Olympic excellence showing the understanding of how difficult it was for the family to have him away and training so much in the past number of years. In terms of his past, when asked, Simon said his best sport as a kid was, "Endurance. I wasn't very good at shooting the puck, but I could play every shift. I wasn't the best person to kick a soccer ball, but I could play forward and defense." He first realized that he could make a career out of triathlon in his late teens and dropped out of university to join a club from France.  Simon praised his parents here stating that the only thing they wanted from their kids was 100% commitment to what they were doing. When he told his father he was leaving uni and heading to France, all his dad had to say was, "You better work hard. Every day."

The story goes that after Simon's speaking event, he called up his buddy Adam to go for a drink (Adam lives in Toronto). While they were catching up, Adam lamented his fitness level and stated that he needed to get "back into a routine." This is when Simon asked him to come along with us at 8am the next day. And he did!

The run was a nice one from the financial district through to Cherry beach; out 5k and back again. I had run that part of the path during Midsummer so I didn't have a problem with the route, but MAN, this group was FAST! At one point, the smaller trailing group got stuck at the lights at Jarvis and Lakeshore and when we started up again to catch Simon and the lead group, we were running in the mid-4:XX per km. I kept my head and my speed in check and got to run a bit with Adam (didn't talk much, but shook his hand at the halfway point) and then spent a lot of time chatting with Simon's agent who was a fantastic guy!

The group waited for us laggers at the turn around, but it was clear that there were a few of us that couldn't keep a pace of about 5:10/km and so we lagged again. No worries, at the end of a brilliant morning run, I was able to catch both Olympians for a photo opp:

It was such a great opportunity to run with these guys and I'm grateful that I got the opportunity. Not only do I have a great story to tell people, the run itself made me realize that a quick and enjoyable run before work is totally doable on Tuesday mornings when I have no childcare responsibilities. I think this realization will come to serve me well in the future and for that, I doubly thank Adam and Simon for the continual inspiration, even in areas they wouldn't have anticipated.

And, let's be honest - they're both very easy on the eyes, don't you think?