This is the third year I've started my race season with the now 35th annual Robbie Burns 8k road race. I had big plans for this race when I signed up. I wanted to go sub 40min (reasonable considering the condition I was in last fall) and I wanted a real shot at improving my AG placing (all dependent on who shows up that day. In 2013, I placed 13th).

The morning of the race dawned cold, but sunny. It was -24c with the wind chill (-11F), but at least it was sunny. I had gotten custom made shirts printed in the summer with our family crest and motto on them (Touch Not the Cat Bot a Glove - don't ask me, I just married into the clan) and anticipating the cold weather of this race, I had ordered a larger size so that I could put it over clothing. This came in handy.

I met Patty at her workplace. She had picked up my bib as she lives in Burlington and we were able to use the washroom without line up or fuss. Time to jog the 500m or so over to the start line through the slog of ice and snow on the sidewalk. Good thing we'd be running on the road.

At the start, I met up with some friends and chatted. I stayed with Patty because we had the same sub 40 goal, but I already had the feeling that it wasn't going to happen for me that day. I had run a 20k easy run the day before on the treadmill and this was the last 8k in a 76k week.

The gun went off and we were away. Patty sprinted ahead, weaving and edging around the slower people who are always lined up wrong and I just followed her. Once we got out on to Brant, I knew I didn't have the sub 40 in me so I just let Patty go.

The rest of the race was pretty much spent watching people pass me. Once, I saw my time hover around 5:20/km, I decided to do my best to keep it there. Once you hit Guelph Line, you get a nice downhill heading into the lake which is fun because you can speed up a bit. There was some slushy snow on the road and myself and other people were running tight to the cones where there was clearer road, but it was never that crowded. I saw a lady running in Yaktrax which was overkill, but I guess you never know.

Like in every other year that I've run this race, I was over dressed. I ended up pulling off the buff and hood about 2k into the race. I could feel the sweat inside my sleeves, but couldn't do anything about that.

Around 5k, I started to look for Emma who was going to be waiting with her camera! It was then that I noticed that Patty was only slightly in front of me. I realized that I was not the only not having the day that had been planned. I didn't try to catch Patty, instead I just kept running steady. When I noticed Emma, I screamed as much to Patty who pulled some photo moves. The funny thing is, Emma didn't notice Patty at all! She still ended up with photos of her though. And of me:

Photo credit: Emma
Then it was only three KM to the finish and I put some jump into my step to get even with Patty. The conversation went like this:

Nic: Shitty day.
Patty: Yup
N: You'll still out kick me to the end. I have no kick.
P: Maybe. I hate the wind at the end.
N: At least you'll beat Greg (Patty's husband)
P: Yup

There are some photographers here and I oblige, of course 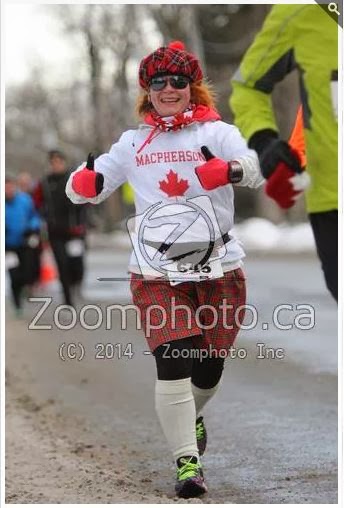 And so on we ran. It sucks to pass Brant as that is where you turn to the finish of the Chilly Half Marathon. This race, you turn up Locust which is truly an uphill to the end. We see finishers warming down (Black Lungs and Longboaters) "Showoffs," Patty says and I look at my watch. 800m to go.

I may get a PB here!

I tell Patty as much and begin to run a bit harder. I know that I just have to push as hard as I can I will pull out a few seconds. So I do even though my legs feel horrible and I finish with a 5 second PB: 42:21 and a 10th AG placing! 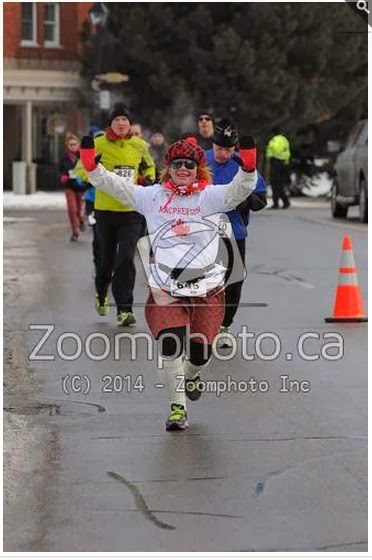 Not bad for a day of not racing.

Not a bad start to racing in horrible weather. Patty crossed right after me and we ran into Zindine right away and waited for Greg and Irina. Once everyone finished we headed inside for the amazing feast that this race always has and then I had to say goodbye to everyone so that I could make it home in time for Alasdair's hockey game.

Next up? Chilly Half Marathon.