This past weekend was the 19th annual Chilly Half Marathon in Burlington, Ontario! This would be my third year running the race and the first year I wasn't planning to go for a PB. As discussed I wasn't ready to try and beat my Hamilton time and I've been having problems with plantar fasciitis. So, the plan came together for Sam and I to pace Emma to a new PB of 1:50!

Then we woke up and it had snowed 10cm overnight and it was -14c (-20c with the windchill). PERFECT racing weather!

Meeting up and heading to bag check, Sam and I kept it on the down low and decided that Emma had to make the call. Sam's PF was a lot worst than mine and she wasn't sure she'd be able to keep up, but I felt confident despite the fact that I had also woken up with a sore throat and runny nose

Emma was keen to at least try to go for it at the start, so we lined up right with the 1:50 pacer and enjoyed the fact that the crowd kept us warm. We ended up with Richard and his friend Robert as well. Then, they started playing the George Michael hit, Freedom and Sam and I HAD to sing along. Man, it was great for a laugh:
Okay, okay, time to go!

So we were off. It was crowded of course, but not too bad. I was surprised when the 1:50 pacer didn't take off more quickly, but we stuck with him and didn't worry too much. We were quickly down Brant and heading west on Lakeshore toward Northshore and behind the hospital. The footing was a whole lot better than expected and I kept asking Emma how her calf was. She assured me it was fine. Sam, Richard and Robert were all around, but I focused mainly on Emma. Before we knew it, the leaders were coming back up Northshore and I knew were were close to the 3k turn and the climb back to Lakeshore East. I took water at the station. Or, I guess I should say I took ice-chips. I am thankful that the day was so cold because I barely had anything to drink at all for the entire race. Every cup of water was loaded with ice chips (nothing the water stations could do in -14) and I was worried about choking. Around this time, I realized that Emma was a touch behind me, but no worries. Sam was a touch further back, but I didn't worry about her at all. Her foot was bad and I knew she'd stick with us if she could. By this time, we were back on Lakeshore heading east and I was ahead of the pacer. I saw Richard and asked if he knew were Emma was as I couldn't see her any longer. He assured me she was right behind us. He took off ahead and I kept checking, but lost sight of Emma. At this point, I was thinking, Sweet, 7k to the turn. I've got this.

I've got to say in this stretch, I wasn't sure if I was going to find anyone again. It didn't get me down though, not at all. Of course there is always a group you end up with and pace with and I stuck with that. I was feeling really good. I wasn't pushing myself to hit under 5:10s/km because I was still holding out hope that I wasn't that far in front of Emma or Sam and I knew we had the turn at 13-14km to make a final decision on how hard I'd push if I didn't see them. Instead, I started looking for leaders and it seemed a very long time before they started coming back toward me. I guess its because I was running a bit faster this year. I also was running with no music at all. This is not the first time I've run a race without music, but this is the first time I've run in a race totally alone without music. Nothing was bothering me though. I was feeling just fine.
It was fun to see the leaders. I saw DM friend, Mike along with Kenny and Phaedra looking so super strong coming back west. I took a GU at 10k with a few ice chips and was excited about the possibilities in the last half of the race had. Right before the turn, I got swallowed by the 1:50 pace group and as I turned around, I saw Emma. I'm waiting for you, Emma, I said. Catch me.

As soon as Emma caught me, I asked what pace she was targeting. Her answer was none. She was running by feel. I cursed myself for not knowing her exact PB, because I knew it was 1:51:xx, and I wanted to ensure she got the PB no matter what. She hooked onto my left shoulder and I had to keep myself under control so that I didn't pull away from her again (aside, this makes me very happy about the state of my training in light of the fact that I want to qualify for Boston in two months). We were in contact with the 1:50 pace groups (there were two), but slowly they started to pull away. I knew if we could see them, we'd get Emma a nice PB, but I didn't say anything to her. She was in the zone. When I saw her look at her watch I told her, You don't worry about that bullshit. That's what I'll do. I feel like Emma understood that I had lots left in my legs and that all she had to do was to stay with me. With three kilometers to go, I told her to just hang on. She was fading a bit and I yelled, Put on your Eminem or something and LET'S GO!!! (Even though he's my running/music boyfriend).

19k and I'm looking for that 20k sign. As you may know, I always hit that sign. I did it in my first half marathon and have never done any different since. There was a photographer here and we tried to get a good photo together, but um... well...

Boom! I detour over the the side of the road and onto the sidewalk to hit the 20k sign. I hear a lot of cheers at that (You go, girl!) and boom, back to Emma and I'm talking now. Let's go, Emma. You've got this. YOU'VE. GOT. THIS. Twice around the track! That's it! (cue horrified groans from those around us). And then we're turning up Brant and the crowds have expanded and we can see the finish line.

RUN! MOVE!!! YOU'RE F**CKING LEGS ARE LONGER THAN MINE!!! (that got some huge crowd laughter. What the crowd didn't know is that yelling so hard caused me to pee my pants. Um. More than a little bit. Yay for those post baby treats!).

And she's pushing and I'm falling in behind her and we're crossing the line to the end. 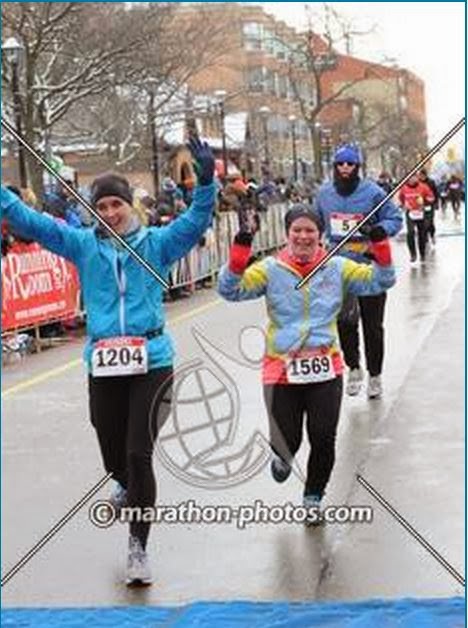 
So? Was it a PB? Did Emma do it? She didn't know! HA! She couldn't remember her time at Hamilton either. But soon enough, we knew - she gained a 5 second PB on a much tougher course (and conditions!) and I'm thrilled I was able to be there to see it! We caught up with Peter right at the end, who waited for us despite the fact that he finished in 1:37 and was pretty much ready to audition to play Olaf, Jr in Frozen 2. We waited for Sam who came in under two hours despite a bad bout of PF and not the best day. Then we went to get our free chili and beer with Richard and Robert.

As for me, this race quieted some nerves about my goals for a sub 3:40 marathon in May. With my PF injury and running indoors so often, I had no idea how I'd fare racing. This race set me up to feel good. I'll likely use it and the next few weeks to make a final decision on what I'm going to do for Around the Bay which will be the true and final test before Mississauga.

One thing I can recommend, if the race isn't going to be a personal best effort, run it with friends and have fun with it. To me, racing is always worth it, but racing with friends is special indeed.