Forgive me for the delay in writing this report; being back at work has seriously cut into my blogging time!

The night before the zoo race was not a good one for sleep in our house. Fergus was having one of his nights where waking up at 4am was the thing to do. We tried to get him to fall back asleep in our bed, but even that wasn't working.

I finally got up around 5:30 and made my way downstairs to eat a few pieces of toast with peanut butter and some OJ. This race was an odd one for me. I had a key goal in mind (PB at sub 59:59) and I had spent the summer speed training to get there, but I didn't have any nerves or anything.

I got on the road early as I needed to pick up my race kit and was planning to meet some friends around 7:30. Despite some slow traffic on the 401, I got to the zoo in plenty of time to get my kit, bring it back to my car (which got primo parking right at the gate), go to the washroom and eat my banana.

I met up with my friends and chatted for a bit. D and her husband were running their first 10k races as was N. They all had time goals in mind and were all going to start in the same coral. I had changed my coral to the <1hr one as that was my goal.

Soon it was time to head to the corals and port-o-potties. We stood in the worst line and were still there when the first two corals left. I got in and out just before my start, but lined up in the wrong area! Shouting, "Oh SHIT!" I booted it across the parking lot and caught up with the last people in the <1hr coral.

I started off with the goal of keeping my pace around 5:50 per KM. The first one was spent weaving and passing as I was at the back of the pack. I did run (literally, I guess) into my neighbour and ran with him for a bit and chatted, but he pretty much told me go ahead as he knew what I wanted to do in terms of time and he was aiming for about 1:10:00 (he finished in 1:03:45).

There is a nice long stretch along Meadowvale Road and Old Finch that allowed the runners to spread out and let me get into a groove in terms of pacing. Once again, I couldn't "feel" the pace and ended up checking my Garmin way too often for my liking. By 3k we started seeing elites coming back along the narrow path and it was great to hear the cheers go up from the crowd of runners as they passed.

Just after this, I saw my first animal: Zebras. It was cool to see them and I thought about how they must feel watching all of these people running past them. They looked like they were watching with the best front row seats in the house!

When the aid station came up, I decided to go ahead and take some poweraid. I don't normally drink sports drink during a run, but something told me that I'd want a taste on this day instead of straight water. I've learned a lot in my 11 races and I managed to get the whole drink down while still running and without getting any up my nose! Hooray!

4 and 5k made me realize that the course had been changed since I ran the race in 2009 and we were uphill, downhill, uphill, downhill. Across the bridge, through the woods and finally hitting the 5k mat. 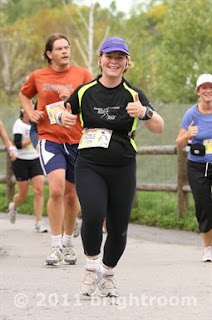 I was feeling fantastic!

I had 100% confidence that I'd hit my goal without any trouble and I decided to hold on to a 5:40-5:45 pace least I burn out. I'm glad I made that choice. The course was very challenging with seemingly constant rolling hills and turns. I was starting to feel hungry! and so I accepted more poweraid at the station when I passed through again.

I did get into the enjoyment of running through the zoo at this point and I started noticing animals. I think a lot of my ability to do so was because of the woman in front of me snapping photos. I was awed to see the giraffes and watched them as long as I could because they were so close. When I passed the flamingos, half of them changed their stance as if on some kind of musical theater cue and it was so cool to see.

After 7k, I allowed myself to speed up a bit and push for a finish with the best time that I could get. I never went out so fast that I thought I would have to stop or puke, and I managed to hold on. I knew that I had the goal in the bag and I allowed myself to enjoy it, smiling at the photographers when I saw them: 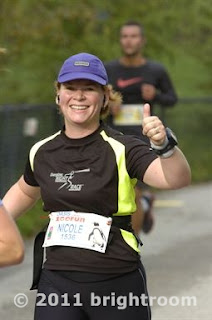 When I got to the last 500m, I noticed a lot of people passing me (especially men who were struggling - I guess there is some pride at stake?) and I realized that I've got to get into the passing mindset at the end of a race instead of in a "thank-God-this-is-done-and-I-hit-my-goal-and-oh-my-goodness-I-can't-wait-for-more-poweraid" I think I'll work on this in the next few weeks.

When I was about to cross, I listened for my name and when I heard it, knowing that I had hit my goal and then some, I did what any normal person would do: The Fist Pump: 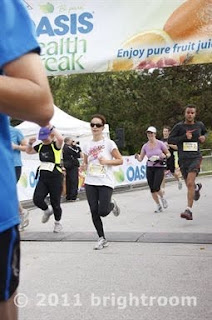 Seriously, look at how happy I am: 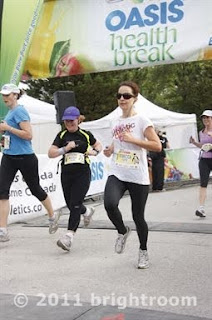 And why shouldn't I be? The stats say it all: