I've hit the training cycle blahs and am doing my best to continue to get out there for all of my runs and stick to my plan...

Sunday: Rest. I totally used the Zoo Race as an excuse - I could have run.

And so I felt guilty and so -

Monday: 16k - LSD after work. I got home at 6pm, dropped the baby off and headed out for the run. It was not very pleasant. Despite eating an apple and a Clif bar on the GO Train on the way home, I was starving by like 7k and the GU Chomps did nothing to help with this. When I got home, I ate my pasta dinner and drank loads of water, but ended up with major stomach issues. I drank some gatorade and ended up crawling up to bed. 1:40:50

Thursday: 5k - Hit the gym for a treadmill run during lunch. Part of the No Excuses mantra. I was bored so increased the pace each mile, despite the hard work the night before. 32:25

Friday: 5.32k - I had the day off of work and was planning to run as soon as I dropped my oldest off at school, but a 4am wake up by Fergus saw me come home and have a nap instead. Then I met a friend for lunch and met my husband at the dealership to buy a new-to-us truck: 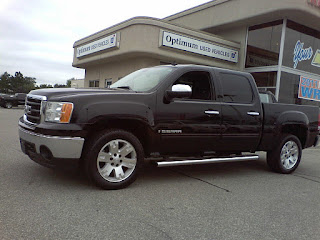 Then I had to shop as we were having people over for supper both Saturday and Sunday nights. By the time I got home, I had enough time to get just a quick run in before I had to pick my son up from the after-school program. 32:15

Saturday: Rest - I PLANNED to run, but there was just too much family and prep stuff to do and as I've mentioned, I've hit the BLAHS this week with running.