Ah, the summer months are ticking by and so is the training plan. The Midsummer Night's Run 30k race is THIS SATURDAY!

Without further ado (or much ado about nothing <--- do you see what I did there? Eh? That BFA in Theatre comes in handy, right?), here is how training has shook out for the last few weeks.

Thursday: I ran a neighbourhood loop after the kids were in bed. This was just a great run - I didn't look at my watch and just enjoyed myself and the running. 6.3k, 36:03

Friday: An amazing morning for a long run! I ran the first 8.6k on my own and then Julie met me at my house and we finished the rest together. Julie struggled a bit and kept telling me to leave her, but I wouldn't because a LSD run is not about finish time, it is about time in total. The run felt great and the company was wonderful. 27k, 3:01:33

Saturday, Sunday - Rest as we were camping at Awenda Provincial Park 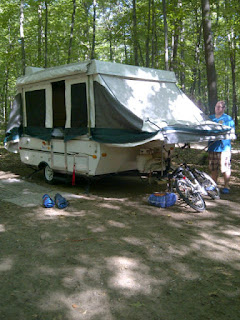 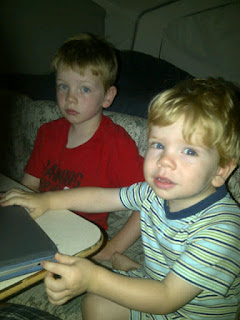 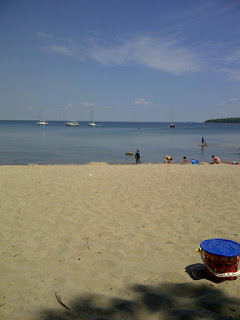 Beach #4 at Awenda. You could almost walk out to the sailboats. The figure in blue is Alasdair. The sand was so hot that you had to wear your shoes down to the water.

Thursday: The first time back on my feet in 5 days and I felt like I flew through this neighbourhood run after a rather long work day. ﻿6.25k , 37:44

Friday: I worked from home because I had no child care for Alasdair (Fergus was at daycare), so instead of a lunch break, my friend Jenn came over to watch Alasdair while I took some time to get another awesome run in! 6.5k, 39:16

Saturday: 19.15 on my own and then Julie joined me for the end. It was a great morning to run even if I was worried about the heat when I walked out the door at 6am. I weighed myself on Thursday morning and was 135.0lbs, after this run I was 130.4lbs. I drank over 48oz of water on the run as well, but it was hot. This run felt great and I was fine after but I felt the effects for days after (as you'll see!). 29k, 3:10:52

Wednesday: My children slept over at my parent's house so I was free to do what I liked! I decided to attempt another tempo run and again it was the suck! I only lasted 5min30sec before I shut it down and conitnued my run (I was pretty much at a point of no return in terms of getting home). I ran out of water, but found a man watering his lawn and got a refill! I got through the run and spent the rest of the night chugging water (and pints) with my girlfriends on a patio! 9k, 54:51

Friday: After supper, but before the kids went to bed, I decided to get out for a short run without any expectations. This proved to be the best strategy as I had my best run of the week to date. 6k, 35:10

Sunday: I had wanted to go out with the running room group, but both my husband and I had plans with the kids early enough in the morning which meant I couldn't go for a run that late. I was up early and caught the start of the Men's Olympic Marathon before heading out for an amazing race pace run. This shorter, faster run allowed me to also see the end of the Marathon. It felt great to run quickly. 14.26k, 1:20:16

As mentioned, the Midsummer run is this weekend! I shall return with some goals!