This past weekend I had the honour and pleasure of being a spectator at the 18km point of the Scotiabank Toronto Waterfront Marathon. I made signs: 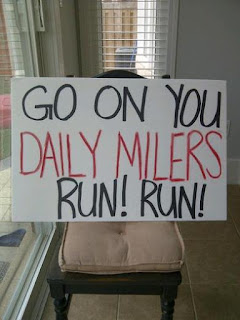 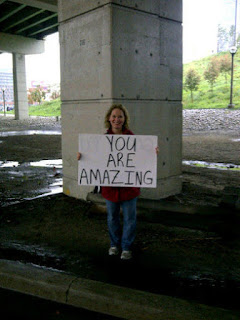 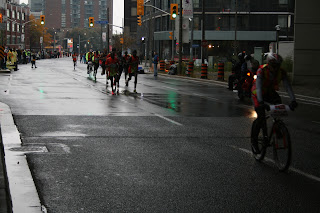 I purposely decided against standing at a designated cheering section as I really wanted to be able to give the runners some encouragement during what can be a lonely and trying part of both the half and full marathon race.

First, I had to get to my spot and I did so by walking along the course backwards from about 20k back to just after the 18k water station. This meant walking through the end of the 5k walk and I began my cheering right away, holding up my amazing sign, telling people that they were awesome, proclaiming my love for Toronto. I hit my spot and cheered on the last community walker groups before I began to make preparations for the next two hours. While I was putting away my rain poncho and putting my camera around my neck, one of the volunteers from the water station came over and gave me a water. See? Toronto really is "Toronto the Good."

There was probably about 20-30 minutes of downtime and one of the teenagers who was working as a cup sweeper asked me if the race was over. I had to laugh and explain to him that it wasn't even close to over! I told him the next people we'd see could (and had) compete in the Olympics and were amazing and then there would be a few hours of "regular" people after that as well.

Finally, the official race motorcycle came by and I started looking for the leaders. I caught a few photos and managed to get one of Reid Coolseat pacing very well indeed. 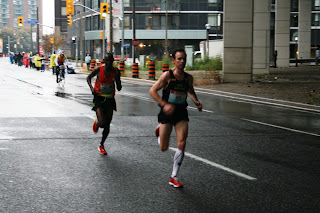 This is when I began cheering in earnest and didn't let up for over two hours.

First it was: "I run as fast as you do! In my dreams!" Then some serious cheers for the leading ladies (though no photos as they were all tucked in behind the pacers).

Then there was this guy, who got, "I can't even see you run by!" 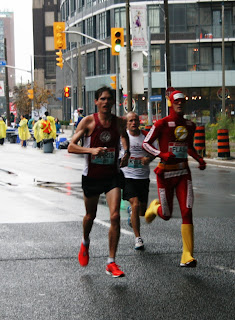 Then lots of others who got the in my dreams cheers or (if female in sports bras), "My abs look just like yours do! In my dreams!" I spotted a hometown hero, who set a record for the fastest marathon by an 81 year old (3:30:28) 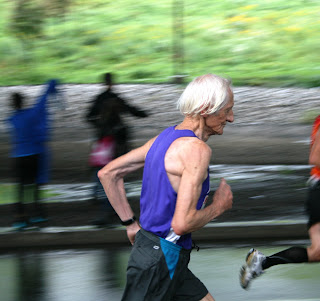 And there were other runners. Lots and lots of them. And they got me yelling their names or bib numbers and telling them any of the following:

"Looking good, Bill! Running strong."
"Making it look easy, Sarah!"
"14770! You're just floating along. AMAZING!"
"Mike! Running and drinking! AMAZING!"
"Barb! That's my mum's name. You're looking great!"
"Daily Miler's? Are you on the Mile?"
"Have I told you lately that you're amazing? (flip the sign over) Well, you are! AMAZING!"
"You're right on time there, Carl." (when a watch was checked)
"No better way to spend a Sunday! Race a few miles! Or 26!"
"This is your victory lap. Your victory lap of all of your training! Enjoy it."
"You only have today to run this race! You're doing it! Amazing!"
"If this was easy, everyone would do it!"
"I promise there is a downhill soon" (I was at the base of the uphill)
"Are you running the half? The half? Only three k left! AMAZING!"
"It's the 4 hour pacer! AMAZING! Thank you pacer!"
"This is a great looking group! Seriously, look at you all! AMAZING!"

And the runners kept running by and I kept cheering, spotting many people that I know and taking photos when I could. I didn't high five many people but if I saw someone wanting a high five, I gave them one. Toward the end of my time spectating I had to put on gloves, I was shivering in the damp and I had to sit down on the barrier, but it didn't matter. I was having the time of my life. I honestly think spectating a major race is a bucket list item all runners should have. You know what those people are going through and you know how to cheer them on. And there is no greater reward then seeing the smiles and hearing the thank yous along the way.

So thank you to everyone who passed a crazy, short lady in red on Sunday and allowed me to spend a few hours in a race, getting more enjoyment then I ever thought possible, not running. 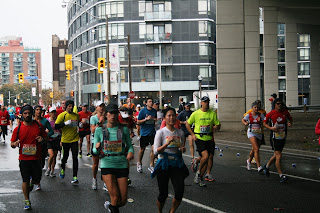 The pacer in yellow is my running room coach, Chris. He's pacing the 3:40 marathon group as his first gig. This was his 24th or 25th marathon.