As you know, I had decided to attempt a PB for this race and to run it with my running room clinic friend, Steph.

The morning of the race was not an early one as the race didn't start until 10:05, so I got up around 6:30, ate my normal pre race meal of a bagel with peanut butter and even had a small coffee! The weather was looking nice - it was going to be sunny with a slight wind, but nothing like the 90km/h winds we had on Saturday.

Another friend from the clinic, Julie drove to my place and we headed out to Burlington just after 8am. Sadly, my friend and neighbour, Kerry wasn't able to run in this race as her daughter had been up all of the night before with the stomach flu and Kerry just didn't feel like she could complete a 21k run, even at an easy pace (Kerry's already signed up for Mississauga as redemption!).

We got to Burlington in plenty of time and parked at one of the designated lots. We then walked to the performing arts centre where Steph and some others from our running room clinics past and present were waiting for us. I quickly decided NOT to wear my extra layer and checked my bag. I opted to run without water on this race, but with my phone.

We milled around the PAC for a bit and then headed outside to hit the porta-potties. This is when the sun came out, so Julie and I walked BACK to my car, sharing a banana and got our sun glasses. When we got back to our friends, it was time to line up. This ended up being a bit hairy as many people were already lined up and the corrals were 1:30-2hr! We ended up squeezing in the front (noting that people were going to be PISSED at us slowpokes being up front) and before long, we were off.

What a CRAZY start! I lost Steph almost right away, but we found each other pretty quickly again. I hit reset, not START on my watch and then once I hit start, I ended up stopping the watch again for a few seconds. Then Steph's watch wouldn't load satellites and wouldn't lock - it was CRAZY. Finally we sorted ourselves out and settled into a pace as best as we could considering the mass of people.

The first 3k took us down past Joseph Brant Hospital, which this race is run in support of and allowed things to settle down a bit. We hit the turn around and the first water station and it was chaos all over again. The station was under-manned and the water was frozen! I was very conscious of taking in water at all of the stations as I didn't have a drop of my own, but man - ice water was not pleasant. I lost Steph AGAIN here, but she stayed behind me with an eye on me and we hit Lakeshore and 5k together. 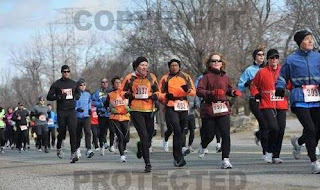 When I checked my time against the pace band, knowing that I was at least 10 meters off, I was worried. I had NEVER been behind on a race before and didn't know how to attack it, except to attack it. Steph and I ran the next few KM together, but she was starting to lag a bit behind. I kept checking for her and lost her AGAIN at the second crazy frozen water station, but found that she was still slightly behind me. I kept checking and checking and finally waved at her to let her know, I just have to go and Steph gave me a thumbs off and waved me away to run my own race (I've since found out that she had a hard time with her breathing starting around the 5-6k mark and it just wasn't her day. She didn't get her sub 2hr half this time.).

To say that being so behind the pace was freaking me out would be an understatement. At the same time, I didn't want to kill myself on this race because it was only meant to be a test of my marathon race pace at most. I was feeling absolutely fine though and was actually with the 1hr55min walk/run pace group, so I decided to pick up the pace and attempt to get back within the 1h58m goal. Increasing my pace felt fine and before I knew it, I was at the turn around point, still chasing the 1:55 group:

Yes, I was feeling that good!

I just keep plugging along at this point. I was feeling so good that I really don't even remember much about this part of the race. I tried to high five the priest giving out oranges, but failed. I had no demons in my head to battle. My legs were fine, I was thinking woohoo! 6k is nothing; just a short neighbourhood run. I knew I had the 1:58 time in the bag and I was just cruising to the finish. I actually had to keep telling myself to reel it in and not kill myself; I wouldn't let myself go until about 20k even though I had LOTS in the tank. 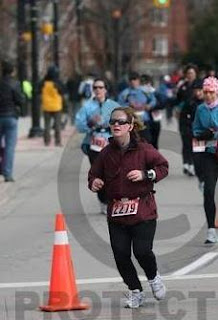 There were police ensuring that we stayed inside the traffic cones, but I still ignored that rule to tap the 20k sign as I ran past (I've never missed this step in a half marathon). Before I knew it, I was back at Brant Street and gunning it for the finish! 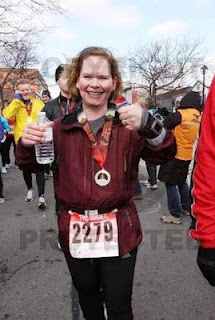 I felt AMAZING! No pain, no mental blocks, nothing! I quickly met up with my friends and we headed to a pub to get our free treats: 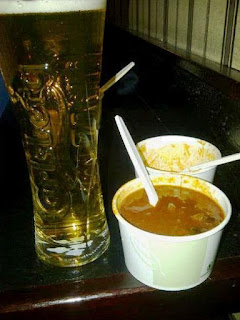 Another race in the books. Next up: Around the Bay!
Posted by macnic at 9:40 AM