What a wonderful week! The days are getting longer, the weather has been AMAZING and this coming week will be no exception! 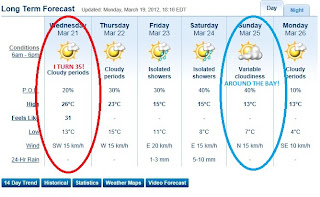 But enough about this week, let's get to last week!

Monday: Rest. After my first 29k run ever, I had no problem resting

Tuesday: Treadmill Tempo! Although I felt rested and my legs felt fine on both Monday and Tuesday, I did feel the effect of the 29k run when I attempted my tempo pace. I ended up breaking the 20 minute session into two 10 minute tempo sessions with a 2 minute jogging break in between. I still hit my tempo pace of 5:19/km, but I could tell that my legs were tired. 6.44k, 37:42

Wednesday: Thomas Street Hill repeats! 8x500m repeats. I was able to wear shorts and a short sleeved top and while I was slow up and down the hill, I still got it done! 11k, 1:10:20

Thursday: Rest. Our clinic leader went on holiday and a few people were going to do the run earlier in the day while I was at work. I decided to make Thursday a rest day and on

Friday: I met up with my friend Kerry for a morning 10k run. She brought along her adorable daughter, Lauren in the jogging stroller and we got nice and sweaty running around the neighbourhood. As I was running home from her place to mine to get to work (I work from home on Friday), I was wishing that I didn't have to work at all and that I could run 10 miles instead of just 10k. 10k, 1:02:56

Saturday: My husband had to work on Saturday and my oldest had a birthday party from 2-6. Inspired by Kerry (and the weather), I decided to take Fergus for his first spin of the season in the jogging stroller: 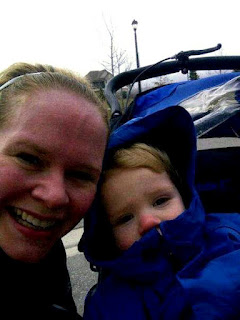 Man, pushing 26lbs of toddler who is yelling, "SIIIIDDDEE!!!" (slide) as we run past every neighbourhood park, uphill, into the wind (I shit you not), is HARD WORK. PHEW! Of course, I can't wait to get out with the Ferger-Berger more! 6.5k, 41:32

Sunday: As our clinic leader was away, a group of us decided to meet at 7:30 instead of 8:30 to start our 29k LSD. We were joined by our friend and summer half marathon clinic leader, Peter and set off for three plus hours of good running. It was a beautiful morning - cool and foggy with the promise of sun and warmth. We made a Tim Horton's pit stop at 14k which likely saved me from stomach trouble later in the run even though I didn't think I had to use the washroom at all. I decided to try out Gu Chomps (apple-cranberry) and really enjoyed taking in fuel more often and actually having something to chew. It was a great run for me and I think that part of the reason is because it was the exact same route as last week. I knew what to expect at every turn and I knew when we were almost finished. I am going to make a point to drive the Mississauga marathon route multiple times before the race if I can't get out to run parts of it. I really think this will help me just as much as the 32k training run. 29.22k, 3:16:04

It was another great week! This coming week is no exception! I turn 35 on the same day I'll run up the $&*%ing Thomas Street Hill a record NINE times, the weather as seen above and I'll hit my first 30k distance when I run (not race) Around the Bay.

How have you been enjoying this warm weather (if you're in the GTA?)?

Do you have any race plans any time soon?

Should I wear a crown to run hills on Wednesday?
Posted by macnic at 8:25 PM