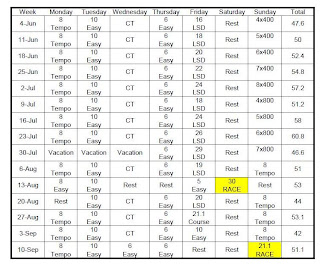 Yes, I've finally written my plan and not a second too soon as it begins on Monday!

The goal of this plan is twofold. I want to be able to race the MidSummer 30k at a pace of at least 5:40/km and I want to put in a strong PB at the Milton Half Marathon even though the course looks quite tough.

The key to this plan will be flexibility. The summer is a busy time for life and work looks like it is going to be crazy as well. I've already booked my outlook every Monday at lunch so that I can get to the gym to get that 8k tempo run in. I think Tuesday is the day that will present the most challenges as I'll either have to run starting around 8pm due to Alasdair's baseball game or run around 5AM because of my own baseball game later that night. Running TO my ball game is out of the question - it is not a safe route and I owe it to the team to be fresh and ready to play, not tired out by a run.

As you see, the LSD takes advantage of the fact that I work from home most Friday's and I will continue to use that time to my advantage, hitting the road around 6-6:30am to get the run in before the workday begins.

I also have left out my plans to turn some of those LSD's into longer tempo runs a la Daniels, but trust me, this will happen. I know the key to running faster is to run faster and I plan on doing just that.

It feels good to have a plan on paper. I've felt rather aimless these past weeks after the Marathon.

Next up: 5k Bread and Honey Race on Sunday. Goals to come!
Posted by macnic at 8:57 AM