Yesterday, I had the honour and privilege to run with Ali as she completed her first ever half marathon and I completed my sixth! I We had a great time and came out the other side smashing all goals with a burgeoning friendship firmly in tact. Here's how things shook out.

I didn't have to pick up my race kit, because Ali graciously offered to do so, getting not just one, but two shirts for us both (for being honest and letting them know that the first shirt wasn't my colour of choice; the blue one was a low seller, so we got to keep those as well). Ali and I had decided to meet at the start holding area at Dofasco Park. I was up at 5:10 (real time 6:10 due to DST!), ate some toast and peanut butter, checked the weather, decided on final clothing options and hit the road by 6am. I made it to the end at Confederation Park and hopped a shuttle for the start. At the same time, my friend Sarah (or my real friend as I said to Colin and Ali) called me, all freaked out begging, "WHAT TIME IS IT?!?!?!" She was sure she'd miss the shuttles and was freaked out. I told her all about Sam's morning from Oakville and suggested that she might also get a PB (and she did, smoking her half in 1:52:59). I was already on the bus at that point, texting alternatively with Sarah and Ali and chatting with the super casual lady beside me who had forgotten her watch in the car but, meh, was going for the BQ in the marathon anyway!

Once at the park complex I lined up for the port-a-potties, said goodbye to any chances of Mr. Stomach-Rock and ran into my running room coach, Chris who was running the marathon to get another one under his belt (he's aiming for 40 by 40 with #40 being at Boston). I went back inside to a text from Ali saying she was there and we began looking for each other. We finally caught up and ... the whirlwind began.

At one point she had gone to say hi to a fellow blogger and I turned to Colin and asked, "Is she nervous?" "Oh ya," he said, "but she talks that way and that much all the time anyway." A final bio-break and we headed outside to get to the start: 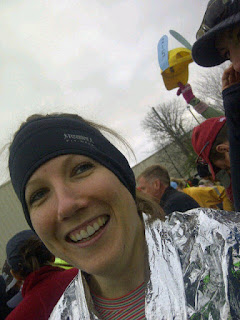 Perfectly lined up with the 2:15 pacer!

The gun went and we were away!

We started strong right away and I weaved a bit, but Ali followed right along. We sorted ourselves out in terms of pace and Ali kept saying that it felt so slow. I tried to explain to her that we were 10 second above pace and if this felt good, we'd keep at it. That we had to run the first five slowly and then hit the downhill strong. This part of the course was nice on a country road with one turn so you could see the runners stretching out in front of you. It was crowded, but after the initial bit, there wasn't much jockeying so we settled in, kept talking (and talking...) and enjoyed what is always the easy beginning. I knew that the 6:23/2h15m half marathon pace would be too slow for Ali, but I was cautious, keeping her around 6:10ish as much as I could. At one point, the 2:30 run/walk pacer was with us and Ali got a bit freaked out thinking that we should speed up and pass her and I let her know that we'd be fine. We had to trust the watch as we started at a different time. We had lost the pacer by the time we turned onto the Red Hill Valley Parkway. At the parkway, Ali's spirits lifted and she yelled out how much she was loving running on the highway and LOVING the downhill. Our pace picked up and I stopped looking at my watch because this part was all about how she felt. I knew I'd have to reel her back in by 9k, but I let her enjoy one of (in my opinion) the best parts of the race.

By 8k, the downhill on the parkway eases a bit and it is gone pretty much by 9k. Ali took a Gu around this time (which I think was very smart) and we slowed down a bit. Ali was a stream-of-consciousness monologue the entire race:

My hip is effing killing me. I need to concentrate on my stride not to over compensate.
Oww, my ankle hurts. I just woke up today and it hurts.
I think I have chaffing on my legs! I never get that!
I have to pee. Should I just pee in the bush?
Maybe I should roll my leg sleeve and use it as a knee brace?
10k to go! I can't do it.
Yes, we've done more then we have left.
I can't wait till we get to the trail. That will really pick me up to be by the water.
I'm good. The pace is good.

I'm not lying here people. We freaking talked the ENTIRE race. If Ali started to get down, I just asked her about her elbow. You elbow never hurts when you run. True story.

We also totally run-nerded out for photos: 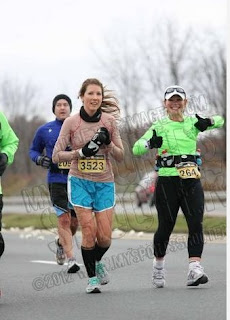 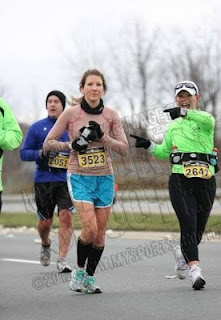 Me: Look at Ali, she's rocking her first Half Marathon! Ali: How do I run with this water again? 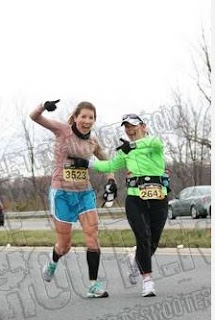 Me: Yo-Yo! Ali: Hammer! Much Respect!

When we got off of the highway at Barton street, we knew that Colin would be waiting for us for a photo opp. I'm officially calling this the best race moment (except the end) for me. I saw Colin first and shouted at Ali that he was there. Unfortunately for Colin, he was there with hands in pockets, camera non-ready. Ali shouted to him, "WHERE'S the #$%^ing CAMERA? Did you think I was going to RUN this race or WALK IT?!? WHAT KIND OF HUSBAND ARE YOU?" I was killing myself laughing and trying to tell her that we were at least four minutes ahead of schedule and it really wasn't Colin's fault, when he was in front of us again (maybe he's secretly the FLASH) and taking our photo! "THAT'S more like it! LOVE YOU BABE!" and we were away to the trail part of the race, spectator laughter in our ears.

This part of the race was new and wow! It was amazing. While there were a few steep parts, we managed just fine, thank-you-very-much. I even told Ali, Peter's tip about relaxing arms and hands and using them to pump up hills and we used that so we didn't have to walk at all. We ran into Lyndsey at this point who was waiting with a "Go Ali Mc" sign. Actually, I saw her first and had to get Ali to notice her! Ali raced to hug Lyndsey and we were away again to hit the short part of the out part of the trail before Beach Boulevard (where I started having trouble last year). This year, there were no problems: 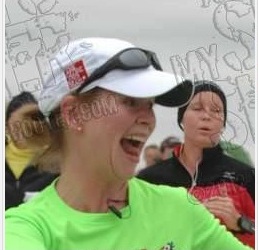 Just before we headed off the trail and onto Beach Boulevard, we saw our DailyMile friend, J Pierre heading for the finish looking strong. We yelled out to him and he waved to us and we continued along. On Beach Boulevard, Ali started to struggle a bit. I mean, she actually shut up for about 30 seconds (love you Ali!). She started having some negative thoughts, which we all know means she just said them out loud and I was there to keep her positive and calm.

And on and on as we hit the turn around and traveled along the waterfront trail to the end. At this point, it was warm as we were out of the headwind and we were a bit sheltered. I kept repeating the same things to Ali about how she COULD do this. She WILL do this. SHE WAS DOING THIS. When there were crowds of people, I yelled to them, "First timer here! Her first half marathon! Look at Ali! 10 minutes ahead of schedule!" The crowds loved it and cheered her along. We were at 18k and then 19k (and as marathoners passed on the out part, I pulled out some of my Scotia spectating lines, telling the 3:20 marathon group: "I ran as fast as you in my dreams. Once." I swear I saw at least 2 1/2 people laugh). Ali was not laughing. She was digging deep at this point. I keep the pace swift, but not beyond her control. I really knew that she trusted me at this point not to lead her wrong. Just before 20k, someone shouted, "You're almost there!" Um. This didn't sit well with Ali, "Shut. The. Fuck. Up. We are not almost there!" I had to tell her, "Actually, we are! One K to go! Excuse me, I have to hit the 20k sign." After I completed MY ritual (six half marathons, never missed one 20k sign). I headed back to Ali and forced her through the last KM. "Do you want me to shut up?" "Yes. No. Grunt."

I kept talking. Serves her right.

Soon, I took her water bottle and told her to concentrate on the end and to make sure she put her hands up. We hit the final hill, rounded the corner and I began yelling at Ali, "Go! GO NOW!" all the while pointing at her and telling the crowd, "First timer! HER FIRST HALF MARATHON!" I fell in behind her and at the line yelled at her to "GET THOSE HANDS UP!" which she did, crossing the line triumphant and victorious! 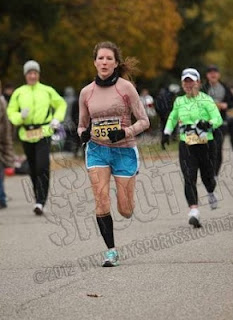 I crossed the line, very happy myself: 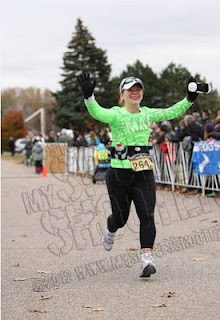 I tackled Ali as soon as I crossed the line and she kinda hugged me back in a daze. Then I sorted her out with getting a heat blanket, water and medal. At that point, she GRABBED me in a huge bear hug and we celebrated. Even I got emotional! Colin very quickly found us and we grabbed food, chatted and eventually I had to get home to the babysitter.

The race was truly a privilege. As I said to Ali during the race, "You're a special person. Not just for running this race, which is special in itself as many won't or can't do it. You're just a person who draws other good spirits and kindness." And that is the privilege. Getting to help someone so special through their first race and enjoying it every minute.

This race has set up other goals. Goals about pacing races and running with newbies. For now though, I will bask in the glow of a perfect end to the race season.

And enjoy the off season.